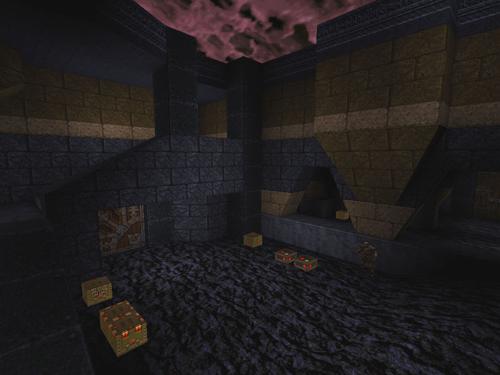 
Qmaster 23 December 2010, 17:57
Man this was confusing, and I'm really good with spacial orientation. Play at your own risk, many bad guys and easy to get turned around. It all looks so similar. 4/5
Cocerello Registered 23 August 2012, 15:32
It's a good map, the layout its the same type as most of the previous ''alks'', as tight as them, but with more differences between the rooms but a bit worse architecture; but it adds an slightly different gameplay and modify the ogre to make it one of the nastiest monsters, that i fear more than the shambler, but even with that, it isn´t hard. I liked too the secrets and the final room.

very tough map for me! i also got lost towards the end, after i backtracked for health and ammo.

Usually I put up with enemies that fire nails. I've never been a huge fan of them, with the centroids being tolerable and the snakemen being borderline. But the new ogre in this map is just frustrating and frankly, not that much fun to fight. It feels like fighting a spawn with a ranged attack, a deadlier melee and no explosion when they die. Not fun.

Another thing that's not fun about this map is the end. I play through maps on normal, and frankly I don't want to imagine what Hard would be like towards the end there... Shambler overload, really. Still, the area allows you to keep your distance from them for the most part, which makes the fight easy enough. It hardly feels like a real fight when you have to do that though.

I had no particular problems with the map's layout. It leads you through the same areas in different ways from time to time, but not in any particularly significant manner, generally choosing to repopulate the most direct path to your freshly-unlocked door with a handful of enemies at most.

More problematic is the architecture; this has never been a huge feature of this series of maps, but I feel like the author really phoned it in here. It really feels like the total number of textures could be counted on two hands, or somewhere around that. After the bar set by some of the other levels in the set, it's disappointing to see results like this. Still, I can't really complain. Detail does not make a map great, only pretty.

I didn't enjoy this at all: it just felt like a grind. Room after identical room, all populated by the same handful of nail-intensive monsters. Only my innate bloody-mindedness kept me going through the brutal end. And it was a relief to finish. Sorry, Kona!