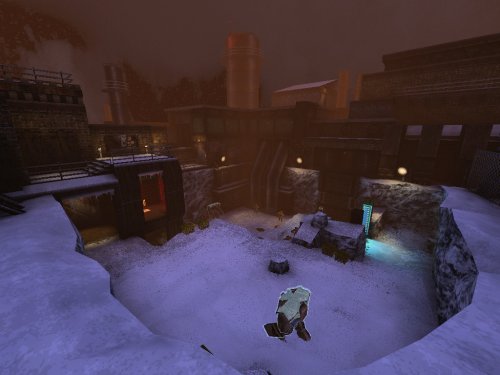 Industrial-themed 1024³ level with a lava-flooded foundry, a humid cave system and an icy outside area; originally started for the Xmas Jam 2019. It uses custom textures from various sources and comes with a new skybox. The map source is included.

I was delighted with the snow in the game twice: the first time in RDR 2, the second time in this map.

upd. Seemd to be an mistake in Author's name (t skipped).

Tons of fun in a run 'n gun style map! Pretty too! Wasn't very difficult on Medium because most enemies appear in front of you and you plenty of ammo for the nail gun.

DragonsForLunch - Do skill 3, diffrent story then. Enemy shoot what seems to be trillons mph and they dont miss. Lol lol. Also ive found a bug, when you get gold key, enemy appear above you on higher floors, they cant see you, but shoot threw floors to get you,so apart from the big enemy robot, you have to deal with, enemy that cant see you are shooting and hitting you thru there floors,if you stand in little box space right from gold key room, you seem to sink half into next space underneath,and your stuck, while everyone is using you as target practice,only way out is use noclip.

The bug room is in screen pic, left to where the gold key is, little box room space

Wow, this was as entertaining as visually impressive. A few minor flaws though: some flying enforcers spawn without the corresponding visuals and some enemies shoot through walls, as Ninja said. Great map, much fun, lots of replays ahead!

The maps are getting better and more rounded, unlike the original parallel-perpendicular quake. This is very good! The appearance of vegetation in most of the new maps is just wonderful! Soon the maps will reach the level of the game "Return to Castle Wolfenstein". )))

Sorry for my english. ))

I'm glad everyone seems to be enjoying the level. Sorry about the bugs - the map seems to have a few gremlins, but it seems that it's not ruining the fun at least :p

I uploaded a video here with all kills and secrets for the folks that like those.

Excellent, new comments are once more being accepted. Well, I really enjoyed 90% of this, a really brutal blast through a well designed base that really benefits from the Arcane Dimensions upgrades. Unnfortunately, it pooped out for me at the top, where there seemed to be an invisible ceiling just above my head in the outdoor areas, making it impossible to walk up the slopes towards the climax. I reached some kind of conclusion using noclip, but it wasn't fully satisfying.

Have others seen this?

I pressed both switches in the room where the "Got it!" secret is hidden, but the blue beam still prevents me from accessing the outdoor area although a few dogs and soldiers were able to make it through to get me. What am I missing?

very pretty, good layout. little ambush heavy esp at the silver key. circle strafe in an area the size of your bedroom while guys with grenade launchers spawn in behind you lol. hectic. fun. really nice use of all those textures. and the deep snow was cool. 4.5 outta 5

From now on every time someone asks me what is a good flow in a map I'll show them this. It may have taken more than a year to brew but it was worth the wait. Superb execution, gameplay and visual-wise. Congrats.

How exactly do you install and run this? I tried extracting the content into the respective AD folders, making an AD subfolder, and making one outside. No luck, it won't load.

@Hazza you need to install it like a a map and not a game see this https://steamcommunity.com/sharedfiles/filedetails/?id=732999296

extract the files to ld 1 , maps . no -game command needed

you need to have -game ad and extract the files to ld 1 , maps

Ah thanks it worked!

BIOME on The Quake Grave

Awesome work on this one Pritchard! This is a great map aesthetically, the detail work that went into this map is amazing! The verticality and flow of the map works amazingly well too. My favorite part of the map has to be the roof top area, I love how you can look around and see the chain link fence and the roof top pieces in the background, very nice! My only real critique is that the map itself feels a bit cramped at times and I think that is pretty much due to the 1024 constraints, but it's more a nit pick than anything else. Again, nice work!

I had a good time shooting my way through this one! Well designed with good flow and visual appeal.

I played on skill 2 and maybe had a little more ammo than I needed most of the time, but I'm not complaining!

I also really enjoy what AD adds to the gameplay and visuals. Good job and can't wait to see your next map!

I replayed this, and was delighted not to run into the invisible-ceiling bug this time. As a result, I experience the proper flow of the map, and really, it couldn't be better. This is the Small Base map par excellence: everything about it is perfectly judged, including the choice of enemies, the supplies of ammo and health, the secrets, and the sense of place. Five stars without a doubt.

I have no idea how I missed this map when it was first uploaded but I'm glad I found it! Perfect layout, awesome texture work, tight combat, and easy to miss but not to hard to find secretes that are very rewarding. This map will go down in history as one of the must plays for years to come.

Sweet map. I love the pace of combat, especially at the early part of the level; the constant push forward, feels very organic - to simply keep going, keep fighting.

Notwithstanding, like with majority of the 'Arcane Dimensions' style maps, I find also the 'Biome' on the easy side; rather soft on the player. Ultimately though, it is a good thing - there is an "evil" difficulty level, for those demanding; which surely will challenge those seeking to face a challenge, while allowing those seeking more leisure, to find some leisure under more basic difficulty setup. I have played on the skill level "2".

It seems that 'Arcane Dimensions', is a good base of contents for both, the fantasy, as well as the science-fiction themes; even if majority of 'Arcane Dimensions' style maps that I have seen thusfar, make stuff feel fairy and kind of "unreal", thanks to some aesthetic nuance, perhaps. It is not 'Dead Space', but it is good enough, I guess. We have to remember that the talk, is still about a game, the baseline of which, comes from the year 1996; even if 'Arcane Dimensions' cranks it up to eleven with everything the scene has to offer and more.

The fights, feel really tight. The soundscape, combined with the projectile based system, is like a good beef stake to my brain - juicy - which is superb. The drone/sky combat scenarios under the blue nightly skybox, feel super good.

This is also the first 'Quake' map, where I see greenery applied freely in a bright environment and it looks pretty darn neat. Furthermore, interesting paradox effect you have engineered, with a Cyborg, appearing first time in a bushy-green area. The snow effect coming somewhat further, is quite amazing, assuming the technological limitations.

I saw some minor error with dogs having had spawned behind a forcefield; with the forcefield disabling, having been based upon all the enemies defeated; eventually the dogs did clip through the forcefield, but it is apparently not a very good condition, all things considered. There should be some spacing implemented, some kind of method to the design, to avoid similar faulty conditions.

The final combat setup, was not very satisfying, but the 'Duke Nukem' style ending, was neat.

Beautiful map, even if a bit shallow.

Top-notch 1024*3 industrial-themed map with non-stop combat that makes good use of the space available as well as the expanded base set of AD. Must play indeed.

A follow up on the invisible ceiling bug: I loaded a game saved before going through the door to the icy area and the bug didn't show up this time. As such, it seems to be triggered some time after going through the door. More specifically, it MAY happen when the "drones" (flying pew-pewers) spawn, since the last time it happened I was able to see them getting "pushed" down, along with the "enforcers" on the roof (which started walking on the invisible roof).

Ok, I tried to record a demo, but after facing the bug twice in a row I gave up.

So, here goes a guide for the secrets:

1- Before reaching the first (working) lift/elevator, look to the right, below the area/platform where you started. Shoot the red thing, jump to that platform and enter the room that has just opened (behind the start location). Boosted nails, yay;

2- In the grassy room, shoot the pipe/grate that has an object inside. The silver key will spawn, allowing the door to be opened. Enjoy your super nailgun;

3- While facing the ramp that takes you to the icy/snowy area, look behind and a bit to the left. There is a hole in the wall. Shoot a grenade in there. Quad door is opened;

4- [The invisible ceiling bug makes this secret unreachable. SAVE BEFORE going to the snowy area] Jump across the gap after getting the yellow armor. There is a "window" (or a hole) in the building. Enter it. Pew pew pentagram.