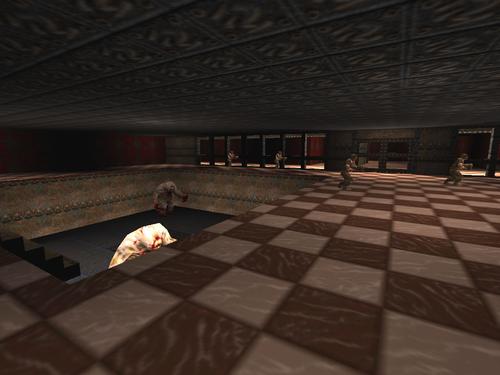 2/5 with 13 ratings
You can NOT add ratings
if you are not logged in.

Bloodstone on The Quake Grave

This second and last version of Bloodstone is pretty much the same map as the first. It's kind of disappointing that more things weren't adjusted in this map to make it a bit better but here we are.

The things changed in this map include, adding a ton of fish in the water and replacing the fiends. Then also adding a set of bars in the area where the pent and quad are. This was a welcomed change as it was too easy for you to finish the level without exploring the rest of it. Though, the map is a little unclear about what you have to do to unlock the bars.

Overall there were a bunch of other things that could've been updated (misaligned textures and what not) but adding the bars to the end room was a really good idea to keep the player form finishing it too easily and it gives you a reason to go back and see the rest of the map. Again, this is a pretty interesting level but not really one I would super recommend. Perhaps if there were a few more updates?

Pretty the same as previous map. No difficulty settings... It's too easy for me. He added fish???!!!XD It would have been much better if he had added a ton of Shamblers around. There are 3 quads on the level, but only one is truly needed. Who would ever care about gaining the ring of shadow if you have everything next to you. Why not to give blue armor instead of red in the very beggining, then yellow somewhere and red in a secret chamber? No Shamblers dwelling in the house? Dogs and grunts and rare weak knights, the fiend fishing makes Shambler upset. How many Shamblers are there? 3 out of 5. Lousy quick exit is obvious.