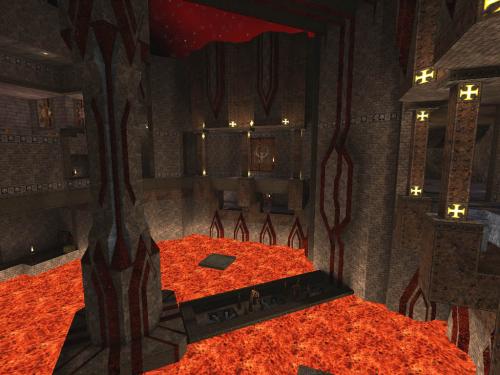 Are you yet Living?


Quaker 19 February 2010, 15:48
I liked this until the final boss. I hate Wyrms where supplies/cover are limited. Otherwise good as usual from this author.
Aen 11 October 2010, 17:30
Doesn't work on Quake Enchanged.
FifthElephant Guest 13 January 2013, 17:27
Pretty enjoyable stuff, slows down a lot on every source port except RMQuake for me though. I'm really not a fan of flying Polyp's ughh..

A lovely semi-abstract map with a distinctly alien feel to it – would say it captures the "Elder World" atmosphere better than most maps on Tronyn's list. It almost feels like something negke could have made (which is meant as a compliment, since negke is one of my favourite Quake mappers). The screenshot led me to expect something in the vein of The Living End, but I was pleasantly surprised: this is far more to my taste than necros's more heavily Doom-influenced maps. At first I felt the same way as Quaker when encountering the Vermis, but as soon as I figured out that side-strafing is crucial, the fight became quite manageable.

Firstly, the map gives you the regular nailgun twice. This would make sense if there were a chance that the player may have missed it the first time around. However, the way the triggers are set up, you cannot proceed without picking up the first nailgun, which makes the second one entirely superfluous.

Secondly, it is a pity the map seals you in twice – first as you proceed from the lower level upwards, and again as you enter the boss arena. This means that you cannot go back to hunt for secrets. It would have been great if the map opened back up after defeating the boss, as in Red 777 or most (all?) of sock's maps.

And on that same topic, it would have been nice to have a mix of easy and hard secrets. There are some areas that require some exploration to reach and really could have been marked as secrets, but as it is, there are only three marked secrets. At least one of them (the first) seems attainable only by sheer luck, as I cannot see any way of logically figuring it out – which kind of takes away the fun in finding it. The other two I can see but have not figured out (yet). If anyone else has, please post the solution, but may I suggest encoding it using e.g. ROT-13 so as to avoid spoiling the map for others?

Oh, and in contrast to FifthElephant and dBAudio, although I also used to find Flying Polyps annoying, I have grown to like them a lot; I think mainly because I love their sounds. They were really hard to fight en masse in Red 777, but here it is not too hard to provoke infighting with the horde of Death Knights.

I remember liking this a lot more 10 years ago, my patience for DBS fests has gone down since then.

Try setting r_wateralpha 1 in the console, quakespasm archives this in config.cfg which often leads to unwanted transparent liquids.

Belatedly, as I first played this one many years ago and have only just replayed it ...

I find this really disappointingly disjointed and arbitrary, with none of that sense of being in a real, solid place that I enjoy so much. Instead it feels like a sequence of set-piece challenges — more of an obstacle course than a map.

That surprises me, because some of the maps that best exemplify this quality are Necros's work, including Once Upon Atrocity and Dawn of Eternity. But this seems to be everything that those are not, and vice versa.

(By the way, the reason I just replayed this is that I saw Much Ado About Nothing at the Attic Theatre in Stratford, and was surprised to hear Benedick, early on, say "Are you yet living?" to Beatrice. So it turns out that I learned that line of Shakespeare from a Quake map :-) )

Sweet map! Despite the hard battle at the end, I loved it!

Too much on enemies spawning behind you, getting hit without time to react and leading to a good chunk of frustration.

This is a wonderfully insightful sketchpad of level design mechanisms, padded out to produce a mildly entertaining level in Necros' classic Quake3-leaning Knave style.

Linear path anxiety is the thing which gets the most experimentation:

The stairwell with cramped mezanine repeatedly sends heavy groups of enemies bearing down on the player, producing the medieval action film classic of push-and-pull charge-and-retreat on stone steps.

The crowded walkway threatens falling off and bayind horde beneath.

Double-jump scares with teleports: It's in front of you! It's behind you!

Foreboding buttons at the end of corridors… some of them worryingly far to travel back from!

Quoth nailgun combat dynamics: better to use limited ammo for the precision to snipe out disparate long-range enemies, or focus all the DPS on the tankie enemy drawing nearer?!