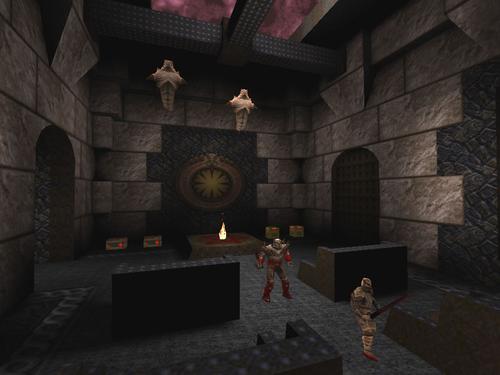 
MegaQuaker 20 April 2010, 4:56
I really love this pack. Every fight kept me on edge. Be very careful and you'll have a blast. Could use improvements in the final boss though.

Well done, funny and intensive action, but I can't give more than 3 stars because of the next:
The problem with this map is that the difficult lies in the amount of enemies and the rather low amount of ammo. Instead of unpredictable ambushes and clever monsters placement, the author crowded most of the rooms with waves of enemies, which can be hard to defeat if your ammo can't be wasted at all.
I think that kind of "mindless" action or "doom-style" action with low ammo availability makes the map to be less enjoyable.

Huh... This download does not work for me. I get part of the way through it, and then it stops. This has happened a few times. Also, many of the links to reviews need updating.

Played with the patch.

I agree more or less with Yamato's assessment above -- it's decent, but not spectacular.

Gameplay is simplistic and predictable, and it quickly becomes a chore just to move from room to room, clearing out monsters. And I really do not like the cutscene mechanic, as I find that it really breaks immersion.

Visually, it's not nearly in the same league as some of Tronyn's later work, but that is probably to be expected. There is a lot of z-fighting and one badly positioned lift, but I suspect this has something to do with how the original Quake engine calculated the position of movable brushes v how modern source ports do (correct me if I'm wrong).

I really do like the start and end maps, though (I do not mean the boss map, but rather the map that follows it).

The start map is interesting in that it includes a bit more gameplay than the usual skill selection maps (although I found the "normal" encounter harder than the "hard" encounter, and the "easy" fight a little too hard -- perhaps a knight would have been a better choice than an ogre. The nightmare monster was spot-on, though).

The end map is interesting simply for being an end map, which one does not see very often. It's very modest, but nonetheless provides a feeling of closure.

Clearly a vast amount of effort was exuded here with all of the custom goodies and it does show...there was some fun and unique elements at work here.

Unfortunately the gameplay is horrendous to say the least. Enemies for the sake of enemies is my absolutely least favorite style of quake map and this was certainly fits the category. The red skinned death knights have a tedious amount of HP and just prolong the rather flat maps. I can respect the new style provided here but it was a miserable experience for me. Final boss was decent however.

A final note can be said about the very last playable map. Like another said, I do enjoy the sense of closure and it did achieve at insert a small amount of emotion into the pack.

Played on skill 1 with the patch.

Have to agree with the comments critical of the gameplay. I'm fine with horde combat in general but there were way too many situations in this mapset where herding monsters into a choke point while dumping grenades or rockets on them seemed like the only viable tactic. This combined with the uber-buffed knight/dk reskins made much of the gameplay rather predictable and dull. (It's even more ridiculous on skill 2, where I barely made it out of the first room after several tries only to be slaughtered shortly after... I highly suggest trying skill 1 first even if you normally play on skill 2.)

Really I think this is an inevitable result of combining a horde-based approach to gameplay with a corridors-and-rectangular-rooms approach to map design. This is one of Tronyn's first releases and he certainly got better at creating organic, vertical layouts. Soul of Evil, for example, uses the same unfortunate monster modifications but is a much better mapset overall.

Tons of enemies for little maps, in every corner there's an enemy ready to kick your a*s, and I love maps with tons of enemies! Another gem made by Tronyn, one of the best Quake mappers (all of his releases are masterpieces)

I'll admit I didn't get very far, but what I played was a lot of monotonous pounding at high-HP monsters with the SSG in boring, square rooms arranged linearly. I had to restart on easy because I ran dry of ammo on the third room! Not good.

I'm delighted and surprised to find a Tronyn release I had not yet played, and an episode at that!

The toughest map for me was the second one, because of all the ambushes and the narrow spaces you have to run around in to survive. The first one was relatively painless even on Nightmare because of all the easy opportunities for infighting. I was kind of let down by the ending, given everything you go through a few minutes before that. And I grew tired of the Hell Demon's voice pretty quickly.

I also noticed a few graphical flaws such as misaligned textures, and the maps are generally not much to look at (kind of like Soul of Evil). Nevertheless, this pack was a lot of fun and a solid 4/5. Lots of situations where you need to run, or think of different strategies to survive. And I was relieved to see the Axeman keeping its axe in his hands, unlike the scary version in Something Wicked This Way Comes.

Far from Tronyn's best work, but a great release anyway.

As one can expect from Tronyn maps, what you get here is nice-looking but fairly simple levels filled to the brim with monsters and non-stop action. However, the execution here is quite lacking. The enemy roster is REALLY tanky, and results in "hold S and M1" gameplay that gets boring quickly. Especially when areas are connected by a simple door so enemies just stream in one at a time. One of the longstanding complaints about Quake is that the enemies are bullet sponges. I dont quite agree with that, but for this episode he made it a reality. There's a knight grunt variant whose only distinction is 1.5x extra health. Who the hell ever thought the knight would be better with more health?? It adds nothing but tedium! Also, I used the word "nice-looking" at the beginning but it really only looks decent, especially compared to his later work. Just play any of Tronyn's many other maps/episodes.

Been playing quake when it 1st appeared, on the amiga 1st. This pak is one of the best 10/5 thats how good, every room is like a bar fight, last one standing still loses lol lol, after a few vodka's i am in a bar fight playing this pak. i set skill 3 then map coe1, the game is brutal, but so good.

Tronyn's work is always epic!! I liked the episode with enemy sub-faction (the titular Ebony Coven), which provides many tough battles with familiar, but new enemies. Given this mod was released.... 20 years ago, wow... It has that retro / old grandpa Quake feel, which I enjoyed)