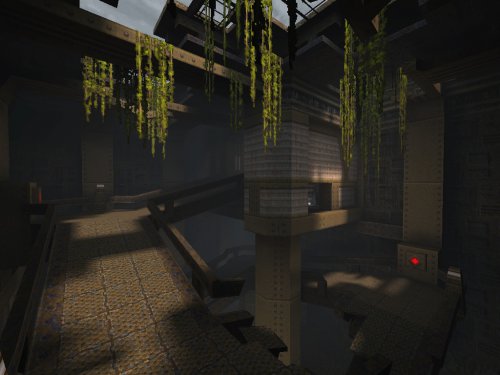 A "Vanilla+" gameplay mod that introduces subtle tweaks to some of the game's core mechanics in order to make for a smoother experience. It is compatible with the original maps and most standard (id1-based) custom levels.

Summary: The mod is accompanied by a seperate custom episode: Underdark Overbright

Overall I like this, but I did hate that the supernailgun got less accurate. Also, is it just me or does the sound effect of picking up a backpack sound like slurping on a milkshake? The ogres are definitely more deadly, not as much as in Quoth or Something Wicked, but still more than vanilla Quake.

Hey Solomoriah. I kinda like milkshakes in my backpack. This episode is done very well. Very challenging! At least for me. The ammo is a bit scarce as well as the health...but that's what makes it challenging. It is balanced though, but you need to figure how to proceed and this is for all the maps in this pack.

Great work! Thanks for sharing.

Hi, on e3m7, at 14|42 kills I toggle a swith and 4 zombies spawned in a holl unred the room. I can fall into this hole, but cant go back. Is it ok? In ID at this moment these 4 zombies teleports around me.

Вася школьник, I reported the same bug, they already found out the reason for that.

gila, spasibo za ssilku. I passed origonal Quake on Nightmare through this mod with all secrets, and game feels like more difficult. But this mod did not resolved main problem of Quake, and sometimes it improved the problem: fat-ass monsters, and weak fartgun called "shotun". Tight coridors with 5 deaths-knights stay at the line, and each of them required 5 weak shots of weak shotgun, 5 boring sickish shots. Run, count "one... two... three... four... five..., ok, next... one... tho... three... omg die please i so bored to kill u". I saw a mod where shotgun was double stronger with slowed down rate of fire, and it was really cool. And in this mod it looks like Spawns got more health points? Oh no, please.

I have no objection to this mod, but it doesn't in itself make a big difference. I suppose that be counted as a success, since its goal was not to make radical changes but just to tune up the engine.

Mixed feelings on nerfing the SNG. It has bothered me in the past that the regular-ass nail gun is the one weapon that you never use once you get the upgraded version: the single shotgun and grenade launcher both have their uses. It's good that the Copper team found a way to fix that, but it's never fun when an existing thing is made less powerful. I wonder whether instead they might have done it by making the regular-ass nailgun's ammo travel faster, making it a better long-range weapon rather than making the SNG worse.

Oh, and it missed the tweak I would have liked most: that ammo boxes and health are not picked up unless there is capacity to use their whole value. There's nothing more irritating than having to carefully edge around a powerup that I want to save for later because (say) I already have 99 shells and don't want to waste a box of 40 just to get one more.

But then that prevents people from getting the box of shells if they have 61 left and they might want 100. Instead of just blocking the pickup, why not create a promt. “Pickup shells?” or something. Some kind of method to allow the choice.

An ideal solution would be to store the remaining ammo in the pickup and not remove it unless it's depleted. So if you have 70 shells and you run over a large shell box, you will possess 100 shells and the box will remain with 10 additional shells to get from it.

Doom has a mod with a similar idea, AFAIK.

This could apply to armor too, except in this case the armor vests get swapped. If you are ready to pick up armor according to Quake formula for this, then your old armor would spawn in its place and won't be picked up until you are again depleted enough. I doubt there are calculations in place in QC already to make it an easy upgrade; something tells me there are just hardcoded values tweaked for full armor pickups.

Besides, with the new armor rules in this mod (which is a change on par with AD projectile shotguns - thoroughly unnecessary, in my humble) I'm not sure if this is even relevant. But yeah. Ammo system like this would be a dream came true.

Overall a very reasonable set of changes. If I was to modify progs for something of my own, I would use this as a base. Thoughts so far:

Ogre's grenades should be adjusted so they actually come out of their grenade launchers instead of their chest. Considering the ammount of things that have been changed for the better, I'm surprised this has been overlooked so far; unless there's no way to fix it, that is. I'm pretty sure there was a mod around that corrected this, I saw it a while ago but I can't remember the name.

Well, after playing for a while I gotta say the changes brought by this mod make it the perfect choice for playing classic style maps. Among other things I love the idea of Nightmare skill cutting max health by half as replacement for the cheap and tiresome turret-monsters formula, and I'm quite partial to the way armor behaves now; it never made sense to me how could you lose armor points by taking damage underwater, getting caught between a closing door and a wall, and worst of all how even while invulnerable you still had to worry about getting hit because that damn Pentagram of Protection didn't protect your precious armor at all.

That beign said, if there's one single thing I wish was included was reducing the amount of ammo that can be carried, namely, giving players a maximum of fifty shells, grenades and rockets (nails and cells are capped at a reasonable amount). Now, this could be just me, but this has been a long-standing and ever-present issue with id games: they throw more ammo down your throat than you know what to do with (I'm looking at you most of all, Doom 3), and to make matters worse it seems like most mappers are ok with this awful tendency. It's bad enough that vanilla Quake maps are littered with excessive ammouts of ammo, but unfortunately this problem also extends to a significant number of custom maps; I'd dare say most of them. Usually, when you get your hands on either a grenade or rocket launcher, all other weapons become virtually useless, and this is only aggravated because you can carry so much ammo for these two weapons that you rarely run out, not to mention that you can also carry a huge baggage of shells. I've seen this happen many, many times, and it's just disheartening how much this problem deflates all the challenge. I tried making my own Copper-based mod with this particular feature, but sadly I have next to zero experience at Quake modding, it's just way too damn complicated for me and I wouldn't even know where to start.

I will reiterate that I agree with the SNG nerf, but I also disagree with the NG buff. It's too similar to an assault rifle now, the videogame variety that doesn't even have spread. Quake has one paradigm - no weapon is too good for long-range combat, and I don't think it should be significantly altered.

SSG nerf is all the more baffling in this context. It's already tempting to overuse nailguns in the stock game, even the regular variety, when you have a surplus of nails. Now that the balance has shifted, SSG turns into a conservation dud you can't wait to put away.

Limiting rockets is a minor change in comparison, but I'm still tempted to ask what is it that the author has against fun.

Huh, it's the same version as before.

UDOB is fantastic but the copper mod itself is badly overrated. It is does little for quake that previous mods have not really done better and only seems to strip gameplay of any enjoyment witout really increasing its sophistication - the only improvement is the armour behaviour. The rest is not needed. Also, I prefer the quoth 100% z aware ogres personally. Many mappers create problems like ammo issues, parts that are too easy and parts that are boring due to low ammo and well meaning but ultimately poorly judged copper tweaks exacerbate these problems (a single rocket per ogre is a good example) and generally reduce the enjoyment of the gameplay. Its a shame so many mappers are now using copper as a base.

Quoth does not have Z-aware Ogres.

That's because you went through the NIGHTMARE setting portal.

Nerfing Nightmare was a really shitty and braindead change. There were no "turret enemies". Those were ranged enemies and they were attacking you with ranged weapons. That's how it's supposed to be. Stopping their attacks to take a break and jog around for a little bit is not a fix, that's just stupid and makes the game retardedly easy.

No matter how you feel about it, there is no need for this kind of foul language. Please behave like a decent human being on this site and speak like a grownup. Thanks!

Maybe halving ammo as an additional feature as I mentioned nine posts earlier would spice things up. Just saying.