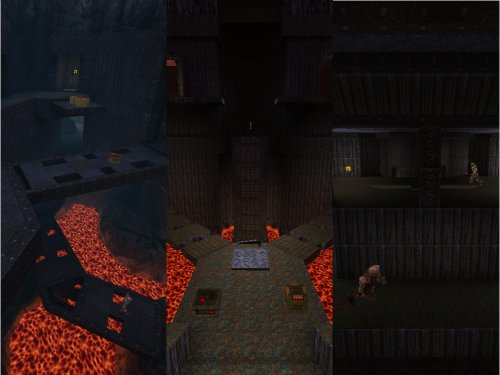 DLC/Update for the DM4 Jam with improved versions of several maps and three previously unreleased levels. The start map has been updated with additional exits. Some custom skyboxes and the map sources are included.

Note: Some of these maps require a source port with increased limits.

Worth a download, just for that dose of negke's typical humor and cleverness.

Below are my reviews for the DLC maps. You can read about my general thoughts on the map jam on the entry for the main package, where you can also find the link to the demos. The weighted average for the DLC maps is 4,18/5, so the overall quality is up there with the original maps. :)

11:01 completion time, 41/42 kills, no secrets (but found them on my secret hunt run. (Spoilers) I thought the teleporters were for DM play only) xD, no deaths. Nice little map. Its interconnected layout would probably make it a great DM map, which is great, considering how the original is a DM map. While I didn't find any real flaws with the map, I didn't find anything stand out much, either. That is, until I got to the ending, which was really cool! :) 4,25/5

Dreaming of Drowning by Adib
(dm4dlc_adib)

If I'd have to describe the map with one word, it would probably be "relentless". Monsters just keep spawning in at a steady pace, so you'd better kill monsters faster than they spawn. I don't have a problem with the relentless style, but at times I felt it got a bit cheap, for example with three fiends in a relatively tiny space with little room to maneuver. But even with the brutal difficulty, that felt a bit unfair at times, the map was quite clever and fun to play, and really pretty too, so I guess I'll rate it 4,25/5.

Spoiler alert, I killed the shambler by squishing him with an elevator. Did I do it right? xD

Warriors of Old by JCR
(dm4dlc_jcr)

10:03 completion time, 69/71 kills, 1/3 secrets (found the rest on my second easy difficulty run, though I reached one of them probably illegally by rocket jumping. After seeing that one secret, I think I know what the title of the map is referring to) xD, no deaths.

The map looked quite good and played pretty well. I liked how the map played somewhat differently depending on which path I initially chose. The final fight felt a little bit unpolished, since I could cheese it pretty well by camping at the starting location. The map also had these multiple different buttons and switches going on at the same time, which, though didn't quite confuse me, but maybe made the map feel a bit, jumbled, maybe? Not that it really detracted from the experience, but was just something that I noticed. 4/5

Warriors has a nice explorative vibe to it. Drowning looks stunning and flows smoothly. Tits is tits, thanks to that surprise ending.