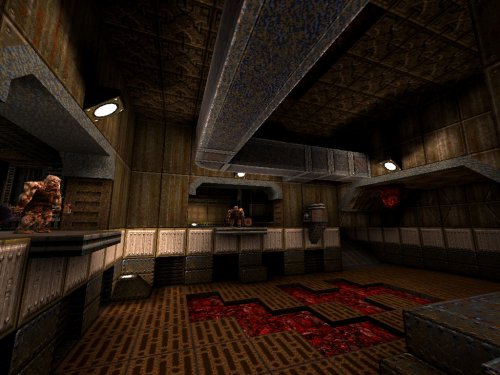 Note: This map requires an engine port with increased limits.

dw, i really loved playing this map. i thought the ammo balance was pretty perfect. i ran out once in the room with the 3 teleporters, and had to go back and find some secrets, but that was my fault.

the level was a little mazey, but i never felt lost and didnt mind the back tracking since this was the nicest looking quake military base i have played through in a long time, if ever. i really appreciated that the whole thing wasnt just tan color. i hope other authors will be inspired to make more texturally diverse bases.

i also hope you will have the time to complete some more maps in the series, bc this was a blast for me to play. hopefully tomorrow i will get to dive into part 2.

personally i think this was damn near perfect. 5/5

I did enjoy this, but found myself spending rather too much time hitting buttons, then wandering around trying to figure out what had changed. I didn't find many of the secrets -- just 7 of 18 -- but the ones I found were mostly pretty satisfying. But it was frustrating to have found the Gold Key and then to have nothing to use it on. Evidently I missed a lot of important stuff, because when I reached the (slightly anticlimactic) ending, I had only 194 of the 220 available kills (on Hard). It would be great to see a secrets guide some time.

Anyway, I am looking forward to part 2.

This really is a fine-looking base map, with lots of detail brushwork and a great mix of stock and custom textures. There are lots of neat touches like machinery with glowing animated electric pulses, breakable screens, and computer terminals all over the place. The way the base is progressively "invaded" by the hellish presence as the player progresses reminds me of Doom maps where Hell spills over into the Martian techbase. It also gives the map a meaningful sense of progression.

Unfortunately the map ended up being a bit mazey after a few buttons were pushed. You pretty much have to remember exactly where a few locked doors are so that when you push the button to open them you don't get lost; only one of them is the way forward and the rest are just goodies, which is confusing.

Gameplay was tough and never boring, with tight ammo on skill 2.

4/5 due to my niggle about the doors, and since the follow-up is even better.

Too mazy and too big for me. I prefer smaller maps, even if it is enjoyable on some parts.

Great, great stuff!!! Sprawling, dangerous, breakable and chock full of fun secrets. Just the way I like them! Spent 90 minutes on 1st run and still have some 4/5 secrets to find. A decise departure from stock base maps, a good thing. Awesome!

Is there in fact a gold-key door somewhere? I've been all over the map looking for it without success. Since the GK is the only reward in one of the secrets, it would seem very mean not to have a way to use it!

(Also: how to get into the room with the SNG?)

Very strange map. Some of the key items to make progress are hidden, which convinced me early on that I would not find a lot of secrets, and progression was confusing at times --- or my poor sense of direction is to blame; for instance, I could not remember where to go once I retrieved the silver key. But I found it odd that the silver key card signs pointed you away from the corresponding door.

I finished the map after about 50 minutes, with only 181/211 kills and 2/18 secrets. The ending also took me completely by surprise, as I was expecting to jump into another area to explore only to be greeted with the finish screen ... and I had no idea where to go after activating the three switches, but I got lucky.

So I have a lot to explore and will probably go back before I explore part 2. I'm curious to find out what this map has yet to offer.

MikeTaylor: yes there is, and I found it completely by chance because an enforcer shot a wall behind me, which opened and revealed a door locked by a gold key. It's hard for me to explain where it is but it was shortly after "New movement trajectory accepted.": I hopped onto the moving container, took the first available exit, and then followed the grunts that were shooting at me. Hope this helps.

Are you talking about the door that "Opens elsewhere... probably." (sic)? Since there are screens all over the wall behind the weapon, and you encounter a few shootable screens all over the map, I would suspect that shooting all screens opens the door, or at least reveals a clue as to how to open it. I'm not there yet.

I'm also surprised that the total monster count in Nightmare is smaller than the one you had on hard. Then again, I found less secrets, so it'll probably increase as I make progress.

MikeTaylor: I was right about the screens, although it can be a frustrating quest because you never get information about how many of these are left (like in most other maps) until you hit the last one, at which point you are told that "Some doors has been opened... probably." (sic).

Very rewarding secrets (especially the gold key area), which is definitely a strong pro of that map. Some of them are however difficult to find, and I couldn't walk you through a few others (I found a grenade launcher just waiting for me in plain sight, my guess is I shot a moving wall from afar at some point without realising it). I now have one kill and 4 secrets left to find.

I still have trouble finding my way around the map, and I keep forgetting where Terminal 1 and other areas are.

I found this a bit too confusing, especially the part where I needed to do something in Terminal 1, which was not marked as such (unlike Terminal 2). Still, there is no denying this is an expertly crafted map.

Things I love about this map: - Plenty of ammo - Tons of secrets, and clever ones at that - Well-placed enemies - Tons of details Things that weren't ideal: - "Where do I go now?" -- (Though the glowing signs were helpful.) - Bugs

I ended up getting both the gold and silver keys and not finding or remembering the where keyed doors were. Then I dropped down to what I thought was the next area only to find the exit screen.

If the keyed doors were in secrets further in, bravo your map defeated dumb ol' me. If not, then it feels unpolished. 4.5/5 stars.

P.S. I was getting an error on the console when I loaded up the map:

======OBJECT ERROR in infoteleportdestination: no targetname

Incredible level! Some of the secret areas are simply unrealistic to find! 5/5