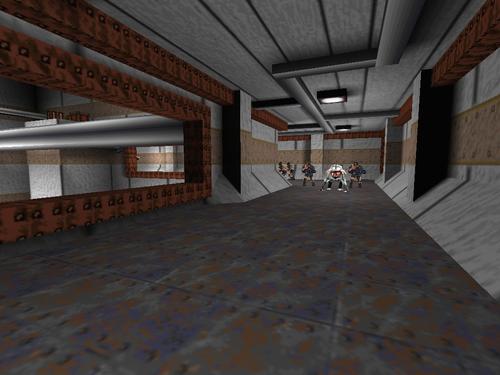 Medium sized factory level with a few new textures, monsters (e.g. Drone and Cyberdemon) and weapons. OKish.
This file was repackaged by Spirit. You can find the original .zip in the trash

I found myself liking this map quite a bit. It's got a clear theme that it's following, and the cavalcade of enemies chosen for the map fit in pretty well. I especially liked the blargs that gave this feeling of a secret base overrun by aliens. The drones fit in too, but I've never liked their unforgivingly high damage output: a few shots and you're dead.

The high tech weapon additions: the airfist and especially the plasma gun were cool, although the airfist seemed to make the super shotty available through weapon cycling, even if I hadn't picked up one.

Ammo is kind of sparce, but it forces you to really choose the right weapon for each encounter, so I liked it. Health pickups are also somewhat hard to come by, especially when you have enemies like the drones draining your health at an alarming rate.

The brushwork is pretty good, and the new textures, if not the prettiest, fit the high-tech white sterile research base theme very well.

The secrets are pretty nice, too. Has anyone found the 5th secret? I did find A quad damage, but I'm not sure if it's the one mentioned in the readme. Maybe it's just not triggering with me for some reason.

Besides the overpowered drones, another complaint I have is having two gold key doors but only one gold key. Thankfully opening only one is necessary, but it could have been executed a little bit better, allowing for both of the doors to open. Another thing that rubs me the wrong way is having guard rails that you can't jump over very easily.

Overall, the additional content doesn't feel like tacked on stuff on top of Quake, but constitute a coherent theme that makes the map feel almost like a different game. This is along the lines of how partial conversions should be done. I'm somewhat tempted to rate this a 5/5 for the good execution of its theme, but it's maybe just a little bit too unpolished to deserve it, so 4/5 (as of the time of writing this review).

Nowhere in the multiverse does this deserve four stars. It's really terrible. 2/5