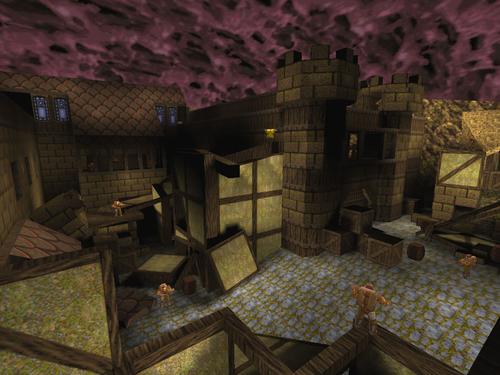 The map was later re-used in Soul of Evil.

Fun map to explore and find different routes. Lots of climbing or tricking your way to elevated places.

The author writes that the first version of the map was released back in 1998. I can't help thinking the author was inspired by the sniper scene in the movie Saving private Ryan when designing the map.

This is a pretty rough map, with quite a few technical issues that work against what is otherwise quite competent gameplay. The first thing I found was the misaligned textures; there are a few crates and other surfaces where the texture is off by sometimes a significant amount. The final button you have to press for instance is pretty obviously broken.

The second thing that stuck out to me was the issue with the replacement assets. The exploding barrels ought to be fine, but either due to haphazard placement on the author's part or issues with Quakespasm many were either floating or half buried in the ground, which made them look pretty weird. Another issue with the replacements was the enemies: They shoot nails, but still cells. Not a huge issue since the map has no NG or LG, but it felt a bit lazy to me.

As to the map itself, rather than its technical issues, i think it's somewhat decent. The lack of monster variety is dissapointing, but something that bothered me more was how significant the hand-holding felt as I played through. No opportunities were taken to repopulate the level after I collected either key, and in the case of the gold key it sits immediately infront of a teleporter that takes you to its door. A big no-no in my book! Might as well have no key and just have the door open when the player takes the teleport.

Another issue is the blocky nature of the brushwork here. Everything is very thick, which makes some of the "detail" in the level look strange and out of place. I wonder if this was a limitation of the tools the author worked with, but that seems strange to me.

In any case, it's a pretty quick level. I beat it in about ~5 minutes, and despite the issues listed above it was still moderately fun. Not bad.

I've not played this version of the map. but based on Pritchard's comments I suspect that the version in Soul of Evil fixes some of the problems. I'd recommend that pack for sure.