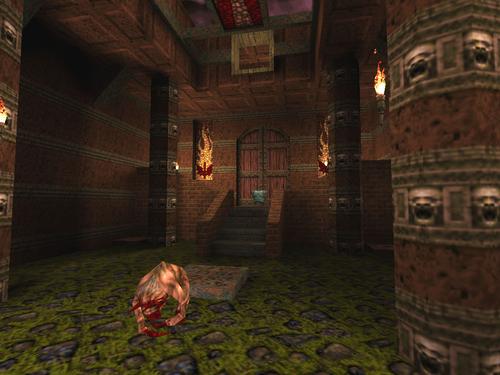 Now that is a great typo.

Again, like for Forbidden Base, I wouldn't say this is "almost id quality", though there's been significant architectural improvements since Juha's previous maps. A few wrong texture choices here and there. Gameplay is decent if nothing special, with a couple design flaws: a shambler waiting just behind an archway too small for him to chase the player and a secret door with no hint whatsoever.

I would say this is very similar to the id maps in style but somewhat lower in quality. It's fairly plain, and while the textures are mostly terracotta there are also a few textural changes that I found too abrupt.

Contra the previous comment, the quad secret isn't unmarked, its indicator is just very subtle. Look closely around the room shown in the screenshot and you'll have no trouble finding it.

I struggled between giving this 3 hearts or 4. 3 may be too harsh, since this is distinctly better than most of the maps that came out in early '97, but that's what I'm feeling right now.

I know the pain, JMP; choosing between ratings is difficult. :/ If only there were half hearts available... (nudge nudge, Spirit) ;D So, if you gave 3/5, that leaves me with 4/5, which I also feel like giving.

The map gave me the vibe Koiste was experimenting with architecture. Almost each room you enter would have different kinds of windows, lights and other details. It made the map nice to behold and brought some variety, but without feeling too patchworky. The overall feel was consistent enough even with all the experimentation.

I have a couple of gripes about the map. The first would be some of the traps, that are completely hidden in darkness and striking you unfairly. After being attacked by them once I did start keeping an eye out for them, and most of them are lit enough to spot. And I was given enough health not to die to the first couple of unfair traps, so it didn't bother me too much.

The other oddity would be the rather unnecessary use of buttons. There were doors that were "opened elsewhere", and the button to open them would be in the same room in plain sight. Such difficult puzzles. :) The button "fetish" didn't really bother me, but were just something that I felt like pointing out.

Not bad, just a little basic.

Overall, i enjoyed playing this map and would give this map a four out of five rating as it has good game play, varied architecture and brushwork and well hidden secrets for the player to discover. I would recommend this quake map for a quick play through as it can be completed rather quickly.