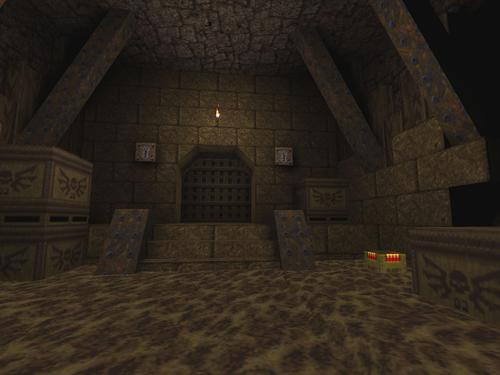 
Drew 10 August 2012, 1:57
I love the style of JFG maps, even if they all look the same, and are kind of plain. The 'sphinx' in this map shows that he shouldn't experiment with such stuff - his usual bricks n caves are good enough. A fun little map, with some pretty decent secrets to be found.
FifthElephant Registered 9 January 2015, 15:27

Found this quite enjoyable, some rooms are little tight and make it difficult for combat to occur. And the traps/ambushes feel a little nasty. Still, fun.

Enjoyable in an old-school way.

Really good for 1997. And even the water is transparent!

Belatedly getting around to some of JFG's old maps after playing his excellent 2016 episode. This one has a nice id feel, maybe a little less complex layout than some of Romero's and Willits' maps. Some areas are nicely detailed for the time, with broken bricks and wood making for (relatively) realistic transitions from one wall/ceiling texture to another, while other areas are more plain. The sphinx thing is out-of-place. Combat was a bit tough but not overly so, maybe less so in the end due to the LG secret which the mapper does everything short of holding the player's hand to make it easy to find. Nice map overall, 3-3.5.

Pleasant map with a nice layout. The trap could use some gore.

I expected the sphinx to look stupid, but it was sort of cute.