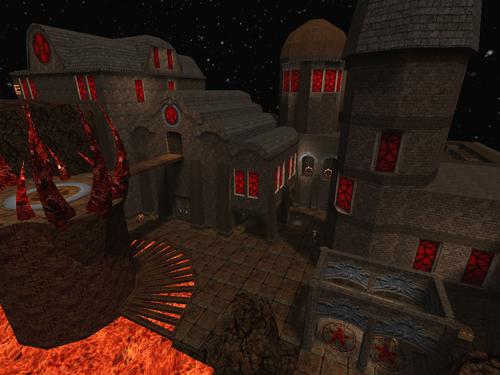 The Rest Is Silence

I really enjoyed the hell out of this map, thought the difficulty was just right (some vets may find it a bit easy I think). :)

perfect for co-op i play in darkplaces

great map. it's definitely easier than that of the contract revoked pack (to me).

How do I get up to the gold key, floating above the circle of evil on top of the tower?

It drops when you kill the drole (normal skill). Might be broken in Darkplaces I guess.

Ah. No drole. I see what I did wrong: I put it in id1/maps instead of chapters/maps. Sigh I guess I'll start again, then.

I wonder why this lists quoth as dependency while it should probably be chapters instead.

I guess either Quoth or Chapters provide the necessary bits -- droles, for example. (Remind me, what's the history of Chapters vs. Quoth? Is the latter a generalisation of the former?)

Well, that was excellent -- lots of creative set-pieces, and perfectly judged difficulty (I played on Hard) through the sequence of challenges posted by the last third of the map. I was twice down to 2 health, and found health just when I needed it most. Must have been one of the loveliest maps to look at back when it came out, too. I rated it 4*, but that feels mean -- I would certainly have gone to 4.5* had that been available. (And the same author's next map, Breakfast at Twilight, is even better.)

Very smart level design in this one, starting with backtracking hints and teases from the start. The distinct outdoor halves contrast effectively and everything in-between's quite the challenge. I love how this develops the Fodrian theme into something more imperial and gothic, reflected in both architecture and fights (especially the custom boss!). Seeing a regular night sky is nice, too, after getting used to daytime red. And it helps that you can jump onto the rooftops at the end for sightseeing and ambushes.

Despite this map's quite nice design, I feel it has some huge faults in gameplay. The author's approach to skill 2/3 largely seems to have been to size up the fights by adding a couple of extra enemies to each pack. The problem with this is that the map suffers from a lot of predictable enemy usage and very little appreciation of the significance of sightlines, so all those extra monsters just eat ammo and make moving around take longer without contributing much of anything. I mean, whether I'm going to clog 2 Death Knights in a doorway or 6 of them doesn't really make any difference, it's just more HP to slog through. I couldn't stand to finish the map on nightmare out of sheer tedium. On normal, the flow of the map felt a lot more natural, but that doesn't solve its fundamental issues. I spent most of this map walking into rooms, seeing a bunch of Fiends/Ogres/Knights, and just walking away where I couldn't get bombarded by anything and they'd all be coming at me from one direction. If I felt like there was room I'd bunnyhop around in circles for 30 seconds until they all killed each other out of infighting. There's no place in this map such strategies won't work - even at the end, where it's pathetically easy to LOS the Vermis by standing on the top platform and raining grenades down on it. It can't hit the player at all. A little more variety in the style of engagements, a little less reliance on putting Ogres on every possible walkway, and this wouldn't have been a problem. If anything, playing this map has given me a lesson in how much damage a lack of subtlety can do to theoretically good map layouts.

Oh, and sorry for the massive wall of text above, I forget these are markdown comments and I need to doublespace.

Fun map, good prelude to Breakfast at Twilight and all things quothic in fact.

Much better than hrim_sp1! Could have been part of the official Chapters pack. Still some issues, like the easily cheesable vermis or tucking weapons away from the main path (I'm thinking of Daz who totally missed the way to a very useful SNG during his playthrough), but it's quite clear that the author progressed in his mapping skils, both architecturally and gameplay-wise. Secrets are nice, a couple of them were a bit hard to spot for me but nothing too nerve-wracking.