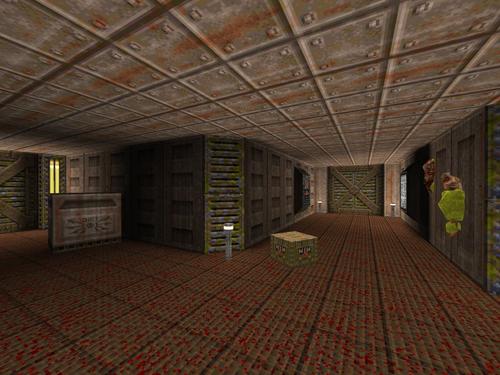 A map built with no more than 256 brushes. Your mission is to download some data, but there are a couple of enemies who try to prevent that. Fast and frantic non-stop action.

On this site there is also the "Dependencies" field on the left. And the Quake Injector handles those automatically for you.
MikeTaylor Registered 24 July 2014, 1:49

If your idea of fun is slogging through a bewildering sequence of identical rooms being repeatedly assaulted by the same kind of monster over and over and over again, then you are going to love Data Download.

If you're like me, though, you'll hate it. I only bothered to finish it out of sheer bloody-mindedness.

Huh! I love this map, it has a super hostile atmosphere and lots of action.

Interesting to see how consistently ijed's map provoke wildly differing reactions. I hated this map and Spirit loved it. Telefragged is my single all-time favourite Quake level, but lots of people hated it. And reading the comments on Warpspasm, it's clear that it polarises people in the same way. (I hated level 1 of Warpspasm but loved level 2, so that dichotomy is at work even within releases!)

I think this is very healthy. Great music tends to polarise people, too -- some people love Hendrix, some hate him, and there are not a lot of people in between. In stand-up comedy, I think Stewart Lee is an absolute genius, but a lot of people can't stand him. I admire ijed for making maps that accord with his own vision, and the rest of the world can like them or not. In short, his work rises above merely excellent craftsmanship, and is art.

I avoid base maps like the plague, but Warpspasm is my all time favorite pack so I gave it a try. This one is really burtal and intense, even on normal. I love ijed maps because he has an incredible knack for a really harrowing tone. This map barely lets you breathe in a way that too few maps do.

MikeTaylor, I'm curious to try ijed's Telefragged, but it doesn't seem to be on this site. Any idea where I can find it?

(Nevermind, I just found it in the Rubicon Rumble Pack.)

I'm giving this one five stars for interesting gameplay. Who knew you could make just two kinds of opponent into such a cool challenge?

Plain map; simple. Decent atmosphere. Faithful to the 'Space Hulk' principles, in which, one plays a 'Terminator' - a special forces unit of an already superb futuristic army of the 'Space Marines' - well armed, well armored, but in this particular case: slow and rather clumsy; which makes it only a partially clever choice for the "Space Hulk" missions.

What is a "Space Hulk"? It is beyond just a derelict - it is an amalgamation of various spaceships, pieces of installations, maybe even small celestial bodies - once inhabited, perhaps - twisted and merged together, by the mighty powers of the warp; the wild tides of an other-realm. It is like a universe in a nutshell, transfigured and mayhemed, beyond recognition.

For the challenges of the map itself, by the time I played it, I have learned how to axe-fight the fiends in 'Quake', so that my wariness of them, has become softer - not that I would fancy axing down multiple fiends attacking simultaneously, though - not in all spaces or conditions, at least.

The protagonist, is armed with most practical gun in the 'Quake' universe, which is to mimick - as I assume - the assault cannon, a 'Terminator' would wield in the 'Warhammer 40000' universe; possibly next to some other iconic weapons.

One has to note, that the map, has limited amount of enemies; it is safe to just walk around and hunt these down as much as possible, before engaging in the "last bastion" scenario, so as not too many of these were there to make things harder. It is actually something not faithful to the 'Space Hulk' design principles, in which the monsters, would rush in unlimited numbers - limited only by the sheer limit of how many of such units are allowed to be present on the map at once.

'Space Hulk', was a tight balance struggle between rush-rush-objective and an exploration setup, also for vital resources.

For the ammo, worry not - it respawns, therefore just keep an eye on your ammo counter, resupply often and you will be fine. There is no need to axe your way through, at all.

Altogether, it is a very nice map to play.

By the way, for the nomenclature, "Death Squad" could be a chapter or a warband, but not a legion; just a nitpick.

in the grimderp of the far future there are no healthpacks, only genestealers