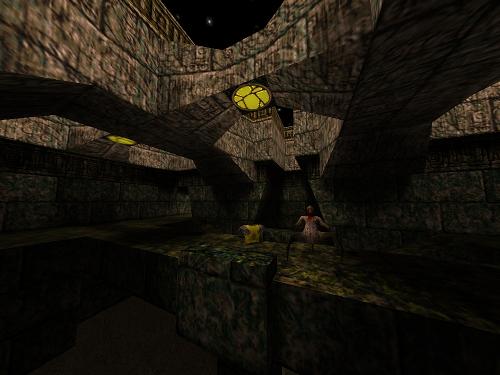 It's a short one, but with a nice water temple design that reminds a lot of Heretic II. Certainly worth about 30 minutes of your time!

I've played through this many times over the years, and it continues to impress. Lots of atmosphere, and feels different from any other level. It's aged well. 5/5.

Played in normal and nightmare. All secrets found.

Very good levels, that highlights in atmosphere and style mainly.

Mostly linear layout, with some nice exploring parts and even some backtrack ways. Brushwork is almost everything on the axis, with variations in brushwork and architectural style along the map, and with many good details to look at . Brushwork, lighting and textures blend well with each other and contribute to the atmosphere and to gameplay.

Combat style have aged a bit, but is enjoyable, with variations on the type of situations. There is no no specially amazing ones to highlight, apart from maybe the one around the pool, but no really bad ones either. Placement, choice and amount of enemies are good, except for most of shalraths. Difficulty around ID maps. The boss fight is well done, but it is a boring fight, mainly because of the choice of boss (not that bosses that provide enjoyable fights are abundant in Quake custom maps, so this is a minor issue).

Secrets are enjoyable and well placed.

Amount of ammo/health/armor is over what you can carry but OK.

Very cool map. I just L-O-V-E-D the aztec theme and its according architecture. I felt like I was playing a Tomb Raider level in Quake!

Still, it was very linear, with a glaring lack of alternative routes and interconnectedness. I would have put a few puzzles and traps along the way to further enhance the theme, Indy style. Also, the boss fight was very disappointing for two reasons: 1) A green recolor of Chthon, seriously? I wished for an aztec god or something. 2) Waaaaaay too easy to beat. All you have to do is circle strafe around the pool and dose the guy with rockets to put him down without even getting a scratch. There are harder parts in the main map! A few extra enemies around the pool to distract the player would've brought some challenge.

All in all and despite the criticisms, I enjoyed playing this quite a lot and will surely come back to it, if only to find the last secret. One more thing: castle?! It doesn't feel very castle-y. Temple or Tomb would be more fitting.

There is an alternate route allowing the player to skip about 30% of the map (and die horribly because they miss the SNG this way).

Found only one secret, but besides this, it is a great map. Really loved it!

This map made me wonder what could have been had Quake's Aztec textures not been scrapped. Beautiful architecture which has aged well and a wonderfully consistent texture set make this a stand-out in visual style.

Sadly, the same cannot be said for the gameplay of this map. Although it is hardly poor, it most certainly is bland and uninspired, with poor arena battles and health/armour/ammo balance leaving me feeling uninterested as I progressed. A retextured Cthon battle is a poor end as well; Having him be a simple tank who soaks up the player's ammo is almost as anticlimactic as the original fight, a mistake I have seen numerous mods make when they reimplement him.

I considered rating this a 3, but considering my personal affection for the artwork/brushwork I couldn't bring myself to.

Years ago, this was one of the first custom Quake maps I played, and its otherworldly textures and great atmosphere really impressed me. Replayed it recently, and I'm pleased to say it holds up.

Beautiful, unusual and atmospheric map. Love the Aztec textures and the mystical feel. Something different and very enjoyable by Vondur.

Very nice. A typical Vondur high quality build. I really liked the whole ancient, swampy setting. The boss battle was a little easy, but the green skinned Chthon was a nice touch. I think if he would've had a final-enemy-wave-arena type ending, like in Adamantine Cruelty, then it would've been better, but again ...this is very nice!

Fantastic layout! There were at least two things I thought I had reached the end, only to discover there was more map to be had. There were a few areas that were a bit samey for lighting that made it hard to build a mental map, but it's a small complaint. The architecture made sure that navigation still went well. Even with some mis-steps, I got through it in a single playthrough. Super well done.