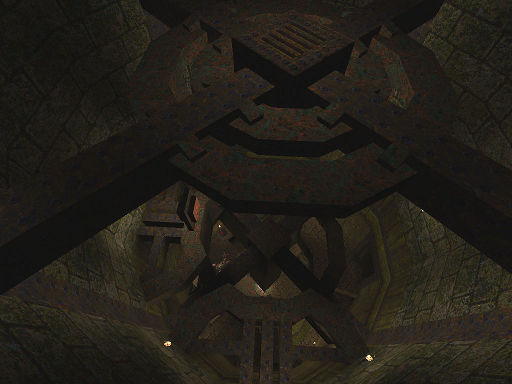 A medium-sized vertical map. It starts with a moldy green area from which you ascend into a mechanical exploratory part. After surpassing this you are awarded a tense boss fight. Lots of novel atmospheric effects thanks to the use of Quoth.

Note: This map requires an engine port with inreased limits.

User Rating: 4.5/5 with 41 ratings
You can NOT add ratings if you are not logged in.
gb 18 May 2010, 1:35
Really cool, I'd like to see more cogs, crazy lifts, ladders and epic ginormosomagasmic end battles in Quake.

One of my new favourite maps.

gj necros.
Zed 5 July 2010, 23:04
The big gears and neat lifts on display in this map are truly awesome, and it's worth it to download and play just to see them. Honestly, however, I felt the overall design was otherwise mediocre. All the tight little nooks and crannies just feel messy and random, lighting is virtually ambient, and it simply doesn't play as well as you would hope. There is little variation in enemies, and rather than utilizing the vertical nature of the map to create interesting fights, most battles are actually straight horizontal affairs in tiny little spaces. 3/5
jmerridew124 21 August 2010, 23:47
I used it in Quake Injector and it locked Quake into an infinite loop of Edict 14 command prompts. I forced my computer to turn off using the power button. Don't download through Quake Injector.
Spirit 22 August 2010, 1:42
Argh! Did it work when you launched it manually without the Injector? What engine did you set in the Injector?

Sorry about that (even though it most probably is the engine coder's fault)!
Lord Graga 29 December 2011, 19:35
Funny little map with a sort of puzzly feel.
jmerridew124 6 May 2012, 18:24
@Spirit
I tried it today downloading it manually and it did the same thing. This time I was able to force the process to end in the task manager but it was pretty well frozen in the loop.
Spirit 7 May 2012, 13:18
What engine do you use? I recommend Quakespasm.
than Guest 18 September 2012, 17:31
Beautiful map with some of the best atmosphere in Quake. Loved all the machinery (gear lift especially) and the gameplay was great - especially considering how tight the map was.
mfx Registered 24 August 2013, 3:34

What a great piece of work!

Great map, though I'm really not a fan of the final encounter. I loved the atmosphere of this thing, really lovely.

A fantastic map, which to me captures the spirit of negke's awe-inspiring but fiendishly difficult Skinny Norris. It deviates somewhat from that map's conceptual purity, but in doing so, Moldy Tower actually manages to be a lot more fun to play. It is never frustrating and constantly entertaining, with first-rate enemy selection and placement and beautiful details at every turn, such as the mechanical machinery mentioned by other comments above.

The ladders can be a little aggravating in this cramped space, though: you have to get on at just the right angle, otherwise you get stuck and have to get back down and try again (often more than once).

The final scene is a real treat, but the final battle itself was a little bizarre. Even though I finished it fairly easily, I had and still have no idea just what the hell was going on. Are the monsters supposed to be so … suicidal? It makes for a deceptive kill count, as a result of which the map felt a tad short. I also felt that there was slightly too little detail given the size of this final area (especially given the meticulous attention to detail up to that point).

These are all very, very minor quibbles, though. Overall, this is easily one of the best maps I have played to date.

This map has really good vertical progression and a highly interconnected layout, but the new sounds and effects from Quoth take it to the next level. Make sure you have plenty of cells saved up for the final fight.

Lots of tension building atmosphere in this one. Loved the brief bit of no monsters while exploring the upper levels of the tower. The finale comes up to abruptly and I had no idea what was going on so I just followed the center print verbatim!

A bizarre mechanical curiosity. Why does this strange tower even exist? What is its purpose? All but the strongest minds will surely go mad trying to answer these questions. As of Dec 2016, still one of the most original and atmospheric Quake maps ever.

A lot of deaths after my departure, and it feels like there's a lot left to explore when you reach the top of the tower. Great release with some unique twists, congratulations!

I wonder why no modder seems to have thought of using the swim up and down commands for climbing up and down ladders. It would allow you to freely look around without affecing your climbing.

Replayed this today. Still fantastic! Not a big fan of boss battles in Quake maps, this one was OK but whatever... the rest of the map is choice though. Such a great sense of climbing around, up, and through a weird clockwork dungeon. The impact of the neat sound design work here can't be overstated.

Off to dig up more necros maps now!