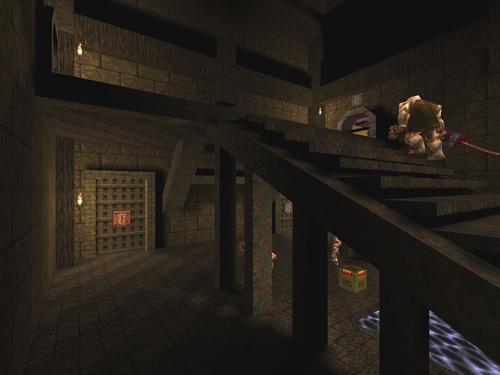 this was decent. a little extra button searching, but easy to find for me.

Nice map with a balanced combat. Of course, it's terribly old-schoo but that's what you'd expect from a 1996 map anyway. A bit more cohesion in the design / architecture would be nice. But overall, it is more or less along the original Quake level stardards.

Let's use the force to Prepare for Hell! This is actually a pretty well done map! I think the whole "shoot the button to make something happen" thing gets a little old and seems arbitrary at times but it's still well built and is a fun play through. Watch me play it here: Prepare for HELL on The Quake Grave

It's got some alright combat but there are two things I do not like, one is that it's rather linear and two is that it never tells you what any of the switches you shoot actually do. Otherwise, it's alright for a 1996 level.

The combat's pretty good sometimes and it looks decent for '96. The switches were a bit irritating after a while and the shambler at the end is pretty much useless due to how much cover you get. Overall it's good but not great. 3/5

Backtracking and figuring out you have to use buttons for everything started to get a bit confusing and frustrating in overall well-thought out map. Ending was a bit pointless - because shambler couldn't even get out the golden key room. I played it twice in a same day, and shooting buttons were still very confusing. Map's brush work was solid and interesting. Rating 2.75~3/5.

Maybe it's just me playing the maps in chronological order from 1996, which makes this map feel amazing in comparison, and in terms of overall architecture and polish it IS quite a large step ahead the earlier maps, in my opinion.

The switch hunting was kind of aggravating, but otherwise the map is really solid; fun and pretty to boot!

I think there's at least one place that I thought should have been marked as a secret, but maybe Obi-Wan didn't know how to mark them at that time.

A mixed bag. The layout is good, but the player has to do a fair amount of backtracking. Each room uses different textures, so while everything looks polished, it also looks incoherent. Monster placement is good in some spots and bad in others. Impressive for a 1996 map but not without flaws.

Average quake map for its time that has excessive button pressing with no clues as to what each button does within the level. Worth a play through but not a real memorable map to explore through. I would give this quake map a three out of five rating as the map is well designed for its time.

I liked playing the map but it has some issues. I gave it a 3.

Even though the textures (across the level) are all over the place it keeps the level interesting, strangely. The rooms are also each different (layout, style, etc) which also keeps it interesting.

It uses switches to gate progress. Since there's no indication at all of what happens when you flip a switch, you end up running around trying to find out which of the gates lifted after you've pressed a switch.

I actually thought one of the red switches opened a secret door (the switch itself was somewhat hidden and open the gate underwater). The map is small so it wasn't too much headless chicken hunting.

The spawn under the cage in the water area - he's stuck under the gate and can't get out so it's just a matter of killing him and moving on (not sure if intentional).

The fight with the yellow Armour/bridge ends up being a brawl between the locals due to close proximity/grenades/etc. Target priority ends up going out the window as I just end up double-barrel shotgunning the entrance.

There's an area with the quad damage pickup under water that felt like it was suppose to be a secret but no message.

Some of the issues feels like a mere oversight, though.

Prepare for... looking for obscure button to shoot, a few buttons to press and wonder what exactly did they opened. Apart from that, for '96 this is quite nice.

I think this is one of the first custom maps that i ever played (warm fuzzies) - and it stands quite well up to the passing of time... Back then, it beat the s*it out of most homemade maps!

Even for today, quite a nice map. Certainly worth a re-play! :)

In retrospect, this is definitely one of the best very early custom maps. (It was released less than 4 months after Quake itself.) The architecture features a lot of creative stairs, ramps, ornamentation, etc. The map's only real flaw, IMO, is what previous comments have mentioned: at two points, the player has to return to previous areas after pressing buttons, but there's no indication that this is necessary. So expect to be confused on your first playthrough, but once you figure it out, it's a fun ride.