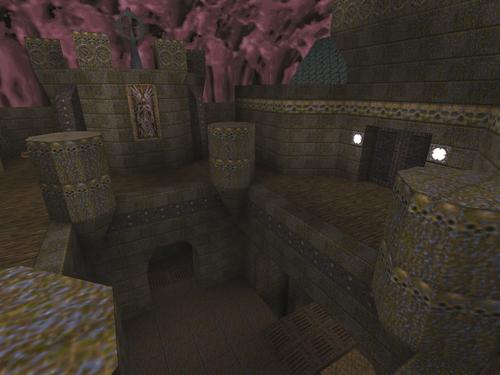 Large interconnected Metal castle with a sense of exploration.


Spirit 16 November 2008, 12:18
Amazing piece of art. Absolutely beautiful looks and the gameplay is as Quake-like as not many. This map just resurrect lots of good memories from playing Quake the first time back then.
Rick Lipsey 17 March 2009, 2:54
Hey, thanks for the compliments. I've recently begun playing Quake again and some of the newer maps are amazing. After all these years it's nice to know my maps can still provide an hour or so of fun to somebody :)
Gib 10 April 2010, 22:21
Excellent map, great fun to play. Plenty of ammo to do the job.
FifthElephant Registered 9 January 2015, 15:54

Seems like the map will be linear from the start but there is a bit of non-linearity to it. I'm pretty sure I skipped a portion of the map when I fell down somewhere. This map is fairly tough.

I'm stumped after passing the gold key door. There's the silver key door, a raised lift, and some other barred paths that I can't get past, and multiple seeming dead ends. On the other hand I've found plenty of secrets in my exploration.... good so far I guess, nice mix of old school and "newer" ideas. I just wish I could get anywhere from here.

I would have rated this a 5 if I hadn't already played some of the best maps by CZG, Sock et al... A very good map that doesn't look too outdated considering its age. Secrets are good, not too hard to find and definitely come in handy to help obliterate the castle's durable denizens. I did miss one, though: I knew where it was but failed to find its access. As for the rest, what Spirit and FifthE said.

Oh, forgot to mention the other reason why I didn't rate it 5: it's possible to skip about half of the map by heading directly to the exit after the bridge with 2 blue overhead lights.

Played this again today and found exactly what I missed the last time: a button hidden in shadow.

Found fewer secrets this time, which turned out to make the ending rather hard (had to ignore the final vore and run past the final shambler due to lack of ammo). The design has a very clean look to it, not super detailed even for the time, but less is more in this case. The layout is truly superb. Lots to learn from this one for a beginning mapper.

A real challenge on Hard, as the ammuntion is doled out very sparingly. Despite being pretty efficient, using my explosives to take out multiples when possible, and causing some infighting, I still made it to the very end with not quite enough ammo -- but happily, with enough health left that I was able to axe the final shambler that had absorbed the last of my nails.

I enjoyed this, but it always felt like an arbitrary sequence of challenges, and if there's one thing I love in a Quake map it's a sense of being in a real place. What with the architecture being very blocky as well, I'll gone with three stars, though really I think it's worth three-point-somewhat.

Mike, look for more secrets. Also, it can be useful to kill knights with the axe whenever possible. Play more carefully and you should have more than enough ammo.

"if there's one thing I love in a Quake map it's a sense of being in a real place." Every other FPS tries to do that, what's the point? Quake's charm, to me, resides partly in its unique abstract and surreal nature.

Interesting point. I guess I don't really play any other FPS, so if I am going to get a sense of place from any FPS it's going to be Quake. But I realise that's not true of everyone.

No other? Man, you're missing on some truly awesome games! Deus Ex, Half-Life, STALKER, FarCry just to name a few...

Mike, if you ever get the time and inclination (I gather from some comments you've made elsewhere that you're a busy man), I'd encourage you to check out the first two Thief games if you haven't already. They're first-person stealth games rather than shooters, but when it comes to immersive level design with a deep sense of atmosphere and place, I don't think any other games I've played compare. Plus they have a fantastic mapping scene that is still active--our very own skacky is one of its leading lights, in fact!

bfg666, I don't doubt I am missing out on a lot of great games: but that's by design. As Lane Powell rightly says, I just don't have the time to spend on extensive gaming; and when I start to game I can get really captured. (Last Christmas I thought I'd finally give in and play a bit of Skyrim. Three hundred in-game hours later, I had to go cold turkey.)

With that said, Lane's description of the Thief games does sound very much like my kind of thing. Maaaybe I'll try one :-)

You mean this one? https://en.wikipedia.org/wiki/Thief:TheDark_Project

Yes, this one and its sequel, The Metal Age. I tend to prefer the second one as it has more refined gameplay mechanics and visuals. The third one, Deadly Shadows, wasn't bad but much simpler, a bit like the difference between Deus Ex and Deus Ex 2. As for the latest, it's a reboot and I haven't played it, so I can't tell how good it is. If you like this style of games, Thief was inspired by System Shock 2, a masterpiece sci-fi FPS with RPG elements that spawned a whole sub-genre, with gems like Deus Ex, BioShock or Dishonored. The forthcoming Prey reboot by Arkane Studios, the guys who made Dishonored, is openly inspired by SS2.

Also, have you tried Sock's In The Shadows mod for Quake? He took inspiration from Thief to make it.

I never really got on with ITS. I should give it another go.

For the majority of this map, I walked the fine line of ammo famine. I was constantly low on shells, nails and grenades. It felt tense, and really that's one of the best feelings a quake map can have. It makes combat that much more meaningful, especially against medieval/otherworld themed enemies which of course don't drop ammo. Sadly, towards the end, the map seemed to drop off significantly in this regard. I found myself hunting desperately for secrets, even going so far as to grenade jump for one I couldn't find properly just so that I could have enough ammo to finish the level. All told, I finished with no shells, no nails and seven grenades. Yikes.

Ammo scarcity is a fine line to walk, and this map does it well for the most part. Another thing this map does well is it's layout: it's decently intertwined, providing a real feeling of density and a strong sense of the abstract that can make quake levels such a unique experience to play. The encounters are tough and suit the areas they're placed in well, with the exception of a few which are particularly cruel and almost guarantee significant damage on the first attempt (teleporting enemies behind the player as they engage one in front is a big no-no in my book!).

The visuals are neither amazing nor poor, providing a good backdrop for the general gameplay focus of the map while remaining consistent throughout.

MikeTaylor, that question has already been answered that in the its comments.

Do not underestimate this map. This map requires careful management of ammo and the use of axe and infighting to complete.

At first I was thinking it'd be a ~15 minute map, however at best it's probably a 25 minute map. The ammo situation is wonderfully tight, and the pulls are great too.

I managed to pull the entire starting area and lower gold key area in one go, and saved a considerable amount of ammo. It's a bit tricky but once you've got it the reward is worth the wait especially if you can save a couple death knights till the end of the sequence by putting them into the center room then pulling the shambler into the hall then pulling them out to get hit when he's chasing you (make sure you pull them out before shambler gets around corner), then finishing off the shambler & grabbing the key. I tried pulling the shambler into the lot at first but that's a lot harder to pull off and then stupid things happen like I'll end up pulling both scrags into the secret button area when I work the ledge, or I'll fall into the lava, or something else will monkey up the demo. usually once you get past the first bit and get on a roll you're good for the rest of it.

I've managed to find 5 secrets, but one I cannot figure out how to get to unless somehow can grenade jump from water. A couple of secrets are obvious however the rest I've found require grenade jumping to access, which is great because it further adds to the level of frugality necessary with the ammo.

My first attempts at this map involved a lot more axe fighting after a few failed runs where I'm out of ammo for the shamblers on the exit bridge. But while the axe fighting is harder, makes you feel hardcore and saves a lot of ammo, it can easily tack on another 5 minutes to the overall run time.

All in all I must give this map a 4.7 star rating, however I wish the secret weapon item was LG instead.

Short and pretty well-designed castle map. Shows its age, but is still fun.

Ammo got a little tight toward the end, making some of the final encounters challenging.

The layout of this sucker is wild ...in a good way. Things interconnect similar to Well of Wishes, but the rooms are expanded and there's more texture variety. It's not overly detailed, but it's really clean and well done. There's some backspawning, but usually a way out, like dropping down, etc. Excellent for a 2000 map.

This map gets better as you progress through it, I was largely unimpressed at the beginning but things got gradually better and I got a few scares. It is also much larger than I expected.

Ammo is way too tight however.

I really like this type of map: spacious, unadorned, focused on gameplay and geometry. Gives off a distilled Quake vibe, pure in its rawness.

that was awesome. really fun. thanx