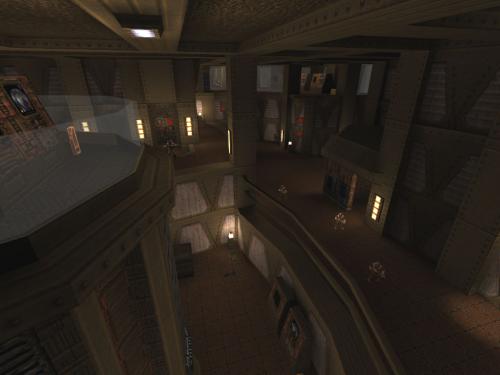 Note: This map requires Quoth. This is the bug-fixed version (some monsters were missing) of quarantine.zip.

Liked this one! Pretty simplistic and standard base map, but fun to play and good layout. The transparant glass is a nice touch. Just remember to adjust the "r_wateralpha" so something below 1 to actually see through it! :D

Hi , nice to see so many new Quake goods ! But base/corridor style really is not my cup of tea :)

video of the map

Good mostly linear layout and with varying complexity and detail in brushwork, with predictable and repeated monster placement most of times.

Ammo and armor quantity is pretty good, but would be perfect if it were better positioned along the map. health is a bit low.

Difficulty is OK , but the combat after the gold key door is hellish and can be considered unfair, in nightmare.

Finished with 149/149 kills and 3/3 secrets -- a rare 100% for me. I have to say I really like this: it's not as big or clever or sophisticated as some of RickyT23's other maps (The Hand that Feeds You, Stark Monstrosity) but it's an absolute blast to play, ploughing magnificently through waves of mostly low-powered enemies who threaten to overwhelm by sheer numbers. It's arguably a bit too easy -- I may have a go on Nightmare, though large numbers of grunts can be, well, nightmarish at that level. But that's OK: this is just a whole lot of fun, and that's (oddly) something that can sometimes be overlooked in Quake!

This map has moments of decency, but overall I found the experience lacking in several areas.

There are certain visual elements that are well built and which provide a good highlight to the map's geometry, but I feel that in general the brushwork in this level is passable at best. Big, blocky rooms, strange staircases and a poor outdoor area (which is like, .5% of the map so it doesn't really matter) mean that for me, this level needs to succeed on the merit of its gameplay.

Sadly, it struggles with this as well. Enemy introduction is well paced at the start, with the beginning containing only enforcers and grunts, then ramping up towards tougher enemies such as defenders and rocketeers. Thrown in to the mix is the occasional fiend or ogre, which helps to add a bit of variety and break up the monotony of fighting the same style of enemy again and again. Then comes Edie. I like Ed a lot. He's a good way to replace the shambler if you're looking for a miniboss style enemy for your base themed level and don't want to involve the otherworld at all (which is beside the point considering the fiends). But like a shambler, you need to place them in an environment where the odds favour the player. Long corridors preceded by an array of tough, health-draining enemies and a distinct lack of health pickups that Ed can spam his nails down makes for an incredibly frustrating experience.

Either give the player effective cover from which they can get up close and deal damage while easily escaping to safety or give them a better stack. Don't just expect them to patiently duck in and out of cover and try and pick high-threat enemies off from a distance; it's not fun, and in the case of Edie, whose nail attack can sometimes come with almost no windup time, almost impossible to do with low health.

Very hard map, I didnt found grenade launcher on the map, and without grenades there is a very few ammo to kill monsters. I couldnt kill last boss, so I run to teleport directly.

Map of the times!