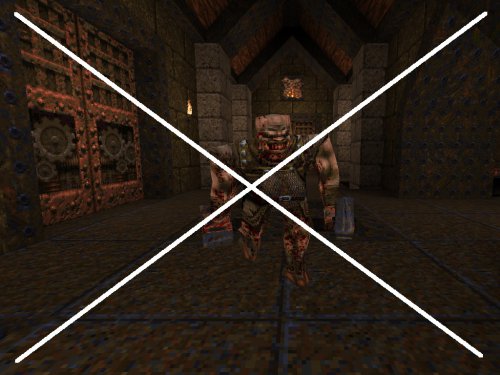 "Welcome to the third edition of Quoth 2. This is a spit-and-polish release, with some new features to play with, but the emphasis on refining the Quoth 2 content, re-balancing some monsters, fixing old bugs, and keeping Quoth as lightweight as possible."

Note: This release was nuked, because it does not include the correct files. → The proper release is available here.

The full zip is not available in the review system currently because our ZIP file list tool fails to parse it. I tried rezipping without success. It is available for download at https://www.quaddicted.com/filebase/quoth2pt2full.zip

I wrote a fairly negative review about the first Quoth release. I felt the monsters were poorly balanced and often ugly. Having played a chunk of this one (I'll be playing WarpSpasm later for a proper benchmark) I think the AI is much more balanced.

I HATED the polyps at first, as it was almost impossible to kill one without losing most of your armor. But it seems like the AI has been made a bit less aggressive and will pause between attacks. Its health seems largely the same (maybe a bit less), but it's much more balanced, and you can finally get through a Polyp fight with your health and armor intact as with any monster, but only if you are good. The enemy feels much less unfair and can still be challenging, as the hitbox seems unchanged and if I'm not mistaken, I thought I saw it shoot 3-5 projectiles in a spread as opposed to a laser-accurate barrage of them. The polyps went from a cheap nuisance monster to another variety of flying monster, and it feels right at home because of it.

I'm also pretty sure the rocket soldiers have less health. I still personally think the rockets turn a bit too sharply, but having been rebalanced somewhat they're still difficult while also being manageable.

The grenade/shotgun soldiers seem less accurate. This was a serious issue before the change as before the green enforcers were much more intimidating than the blue ones. The shotgun could maim you near instantaneously and he was almost always able to connect with it. Now you still need to avoid him, but you can actually succeed at it, too.

It looks a bit like a few of the skins/models have been touched up as well. The polyps seem sharper and more intimidating while the spike ogres are much more easily identified from a distance. This is important and allows the player to make more informed snap decisions.

I'm already happy with these changes, but I'll update my review soon with further assessment of the monsters. "Spit and polish" was an accurate term here. The monster concepts were cool and fit well from the start, but now they also feel like Quake monsters when you fight them. Really well done mod. Can't wait to replay all of my Quoth maps now!

Warp Spasm is fixed to use Quoth 1 content, meaning the patch won't affect it.

Aw balls. Which maps can use different versions? Don't the patches affect the original Quoth files which WarpSpasm accesses? I haven't made a Quake mod before.