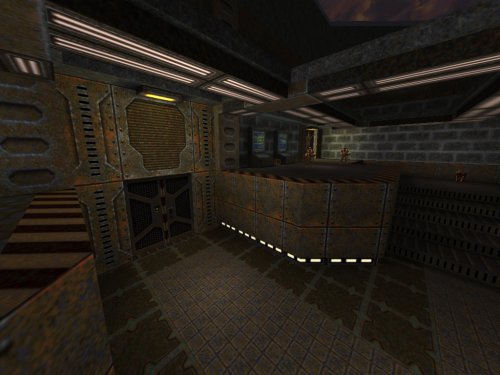 Escape From Your Cell

A small escape-themed base map, partly inspired by the original "Prisons of the Underworld" theme of Func Map Jam 5.

Note: This map requires Quoth and an engine with support for coloured lighting.

Good for a small base level, with just the right use of color and custom enemies to be memorable. The only significant problems are as follows:

Nice little map, but it is too boxy for my taste.

@staff The map archive has bad packaging, QuakeInjector extracts it into ./qouth instead of ./quoth/maps.

I really enjoyed this, and found it much less boxy than many other maps. A nice sense of progression, and a good mix of sniping and hordes. Cosmetics are mostly good.

I got all the kills but missed both secrets. As a result, I was underpowered all the way through -- just shotgun, DBS and nailgun. I suspect explosives would have made a big difference.

Anyway, I would call this a really good second map, especially as it's apparently the author's first all-original design. I'm really looking forward to seeing more.

(Oh, and how I wish Map Jam 5 had retained its earlier theme of "Prisons of the Underworld" instead of mutating into Qonquer.)

AAS, thanks for the heads-up. It should work now.

Mike, Jam 5 was always meant to be a Qonquer jam, it's just that there was initially an additional aesthetic theme for the maps to follow. In other words, the idea was to make a Qonquer map following the theme "Prisons of the Underworld". By the time the pack got released, though, this sub-theme had sort of fallen by the wayside -- but you can still tell that many of the maps reflect the "Prison" theme.

Ah well ... I still hold out some hope of one day seeing proper Q1SP reworkings of some of those maps. But I won't hold my breath.

Enjoyed the part where Ogres are jumping down on you as you try to get up the stairs - interspersed with other monsters.

As with MikeTaylor above, I also missed the secrets, though I did attempt to sniff around for them. It was quite tough with only SG, SSG, and NG.

Replayed, and once more thoroughly enjoyed. It's a shame that Daya has gone quiet, as his (her?) maps always appeal to me. Again, though, zilch on the secrets. I could really have used the SNG.

Mike, perhaps you know this already, but Daya's been working on an episode/mod, featuring a number of maps and some new weapon models. There's a short demo of it here.

Is there something up with the lighting in this map? example I'm running in Quakespasm 0.92.1, if it's any help.

Anyway, I was going to mark this map down for its poor lighting (it looks practically fullbright in some places, with dashes of blue and other colours thrown in) but it's pretty obvious from the screenshot here that something's messed up on my end. Still, there are other things to write about aside from lighting and visuals.

The map's pretty boxy, with large, rectangular spaces filled with enemies connected to other, similar spaces through small corridors. Considering it was originally a jam map, it's pretty passable, although I can't say the spaces are particularly interesting to fight in. It does allow you to be exposed to a large amount of enemies at once, almost in a doom-like way, which is a fun change of pace as many maps tend to avoid hurling obscene amounts of cannon fodder at you and letting you go wild with the nailgun.

In regards to the layout, I will say that it doesn't do much to lead the player in the right direction. I managed to completely miss the SSG in my playthrough, which confused me when reading the reviews here at first. I tend not to miss things (except for secrets, i'm horrible with secrets) so although i'm obviously not infallible it does make me wonder if that area should have been made compulsory rather than a simple side room. I didn't get lost, at least, which isn't something every map can say.

No, Icant, I didn't know about that -- great news!

This is a clean little map with nice attention to detail. Visually the layout's pretty basic, but considering it's one of the author's earlier maps and a military base, it works. The escape from the cell opening sequence was particularly neat. Worth a download for a short romp!

Play it on Hard though. It's rather easy on normal.

Pritchard, what's wrong with the lighting in you example pictures? They look pretty normal to me.

Looks like overbright lighting is disabled on the left.