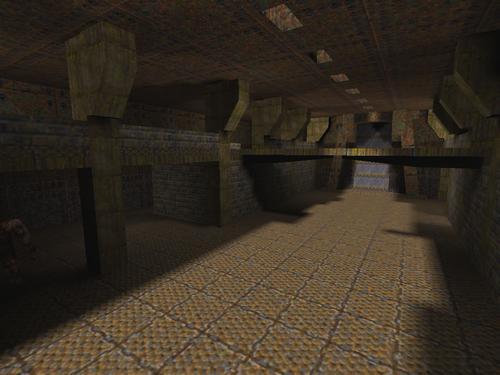 Recommended for its unique progression, and without taking that into account is a 3/3- in my opinion.

Played on all skills. All killed and all secrets have been found.

Quite a different map.

Above average in brushwork detail, but very cramped sometimes, maybe on purpose, non linear branching with several hard blocks layout but not a maze as the tag says as it i made out of at most three distinct paths at once, progression is based on finding keys and buttons in hidden rooms for the first two third of the map and the last one on finding non hidden buttons, combats are usually straightforward with ambushes and behind corner ones, difficulty is around iD maps except for skill 0, the traps are fair for the most of the time, and the secrets are well done while very similar, and with over the top rewards.

Fisrt of all, this map's gameplay changes a lot between skill 1 and 2, due to a severe lack of ammo and weapons at the beginning, which becomes less important after the first rooms, and not much room to move and lots of brushworlk details that can restrict movement. The progression, while it can become frustrating till realizing how the map works it becomes enjoyable with time, also some texture combinations on the last third are quite interesting. On the other side, it is hard to navigate, unforgiving sometimes and some encounters are a bit unfair for skill 0 and 1. There is also to note that it is possible to get stuck or get an easy accidental death in some spots, so i recommend to save two or three times through the map.

How can I open the door with the message "Sadlark is home..."?

Well, going to play this to see if I can help.

All the secret buttons are near the door that opens it. All of them are hidden behind walls with different patterns.

The lack of ammo made it very frustating for me. But overall excelent map.

Your button in particular is in the left side of the said door.

Thanks. I always seem to overlook those misaligned textures.

That said, the house of Sadlark is a terrible place to be in. I don't think my axe will be enough to kill all those shamblers!

Okay, nevermind. I was able to collect some ammo, and it was only one shambler. Interesting map, actually. 3 stars for me.

I enjoyed this map as well as it was better than the the level designer's first map the base of sadlark. It had an adequate amount of secrets as well as interesting level design and nonlinear progression. Only negative thing i can say about this map is that could have used having more ammunition available to the player in order to combat the enemies within the level. overall i would give this map a three out of five rating and say ihis map is worth downloading to play through.

Another Golden Oldie, and highly unusual. This definitely doesen't stick to the norms. But it doesn't do it in a very unusual and very claustrophobic way...