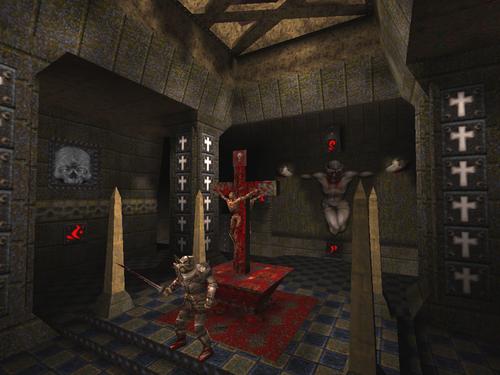 Dig me no grave

Pleasantly old-school, but uninspiring. A lot of running back and forth between distant areas.

Pretty entertaining but not as good as sadlark6. It's buggy in certain areas, e.g., projectiles passing through walls and a Fiend that can be killed through the floor, plus some really unnecessary backtracking. Perhaps more importantly, at least two areas can be reached early by taking the wrong path, both of them leaving you stuck with no way out unless noclipping. The use of traps was fine IMO, as they're an important element in Quake that often gets omited, save for the overfamiliar nail traps. Secrets are easy to find.

Played on skill 2. All killed and found.

Brushwork is above Id maps with the addition of many details, branching mainly 2D layout with choices on where to go next, good lighting, no sadlark progression here, straightforward combats with plenty of ambushes, around Id maps in difficulty, below Id maps in ammo quantity and well placed, around or higher in quantity of health, and easy to find, well placed and with huge rewards secrets.

Very solid map, with the flaw of demons placed inside of walls making a used several times closet ambush futile. Also even though the scale is perfect for Quake and this map's gameplay, it is possible to get stuck on columns on on some minor places. Didn't find the issues NoNameUser reports about getting stuck or projectiles passing through walls but i didn't search throuroughly either. The traps, while of the insta-death type, almost everyone can be avoided on the first run with a conservative play. The layout isn't leading but rely on messages, so there is some backtracking but its not long but frequent and it has entertainment on the way.

5- for the time, but it needs something that can be remembered to make it to 5.