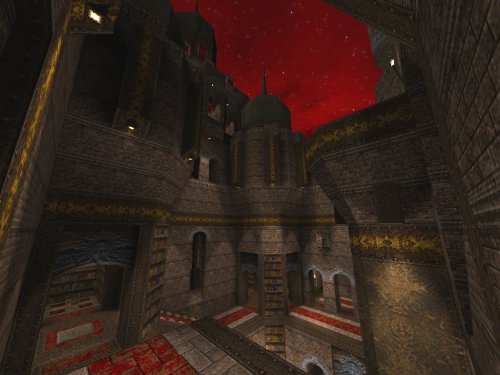 Conference of the Shamblers

Huge Knave-style fortress with many enemies and secrets. The map source is included.

Note: This map requires Quoth and an engine port with increased limits.

It was very good, but some of the scripts didn't work for me (notably, after hitting the two switches, the gate to the silver key did not open, and in the "are you worthy" challenge, after killing the knights, nothing happened).

Very nice map! Could be a little bit harder (played on Nightmare), with stronger monsters (Quoth has plenty of them). Also, big map, but maybe some areas could be more exploited (access to roof in open areas for example).

However, very impressive, it took me 2 hours to finish it and find all secrets!

this is just the kind of place i love to do my killing grate environment! what a way to start the new year!

Excellent map, I liked the geometric approach on some areas! Nice, very straight ahead gameplay.

Other than that, though, it's a really impressive release and one of the best-looking Knave maps yet. A majestic start to the new year indeed.

Love the abundance of secrets (and I am very happy that the trend with custom maps seems to be to include an ever-greater number of secrets). The silver key room is particularly nice: is it an intentional homage to the first map of Q3A? I also really liked the rocky outdoor/cave area, which provided some much-needed visual variety (it could in fact have been bigger and more elaborate in my opinion).

Combat was fair (if a bit heavy on teleporting monsters at times) with adequate weapons and ammo. Monster selection was spot-on. Normally I am not a fan of orchestrated fights where you get locked in and have to kill all the monsters to proceed, but here it was done very well and never felt unfair. There were some complaints on func_msgboard that the boss fight was too easy, but I thought it was fine (maybe the complaints were only about the beta version of the map?). Likewise some people thought enemy placement should have been less symmetrical, but I liked it, as it gives the player the opportunity to strategise.

Bookshelf textures were perhaps ever so slightly over-used at times and I agree with Lord Vorkosiga that it's a pity more was not made of the exterior architecture. There is one particularly lovely exterior scene with some towers (when you press a button near some lava shortly after getting the silver key) which the player never really sees; you need to noclip to have a decent look at it, since during normal gameplay the angle is too low. Indoor lighting could perhaps have been a little darker/varied, but was still very nice.

I really hope we get to see more maps from Skacky.

I thought this was very beautiful to look at, and a lot of fun to play. But I had to knock a point off because it felt very arbitrary -- more like a Quake level than like a real place. For example, there was no revisiting earlier areas at a higher level, which always helps to tie the geography together -- just a sequence of (very nice) set pieces. Still, I'm glad to have played it.

A good effort from a new designer. The rooms look good but to stand alongside the greatest Quoth/Knave maps of the past, it would benefit firstly from more inter-connectivity between the larger areas, some of which were underused or revisited only by backtracking, and secondly from a bit more difficulty to give that dread atmosphere. Also some of the symmetrical areas where you are essentially doing the same thing twice could be done without. Lots of fun, thanks for this Skacky.

Great map, from a great mapper. A five star map. Kells knave texes are really shine here. I'd like to see more from you in future, especially Thiefgold missions Keep it up!

Very very well built. Great map overall. Very solid. A few parts felt a bit empty, while others were a bit overwhelming. The gameplay balance wasn't the best, but it is still a great map. Fantastic looking!

I'm having a problem: after getting the rune, I have to fight some scrags and fiends, but as soon as I kill the last enemy, the game crashes to console and gives me this:

So I'm unable to finish this map. And before you ask, I run Quoth under QuakeSpasm 0.91. Any idea?

Umm... text formatting seems a bit odd on this site. The error message should have line breaks before each ":" and I never typed any italic format. Also, all underscores but one have been replaced with spaces.

*either replaced with spaces or simply ignored.

bfg666, comments use Markdown: follow the link just above the commenting area for instructions. Underscores begin or end italics, unless preceded with a backslash: so "_this_" looks like this.

BTW., I replayed this, and it confirmed my earlier assesment: beautiful and enjoyable, but doesn't feel like a place.

Thanks, Mike. I had never encountered a forum with this behavior before and I didn't know what Markdown was.

So, what about my crash issue? Anyone?

No idea, sorry. I've been using Quakespasm 0.90 on Ubuntu GNU/Linux and it worked fine.

Awesome map. Played on Hard in Quakespasm. I absolutely love skacky's knave-themed maps, they are among my favorites (especially in the contract revoked map jam). Great visuals, good monster fights, nice scripting with the vermis at the end.

My one criticism might be that ammo was too abundant. I never once had to worry about running out which for me is what makes Hard/Nightmare actually a challenge.

Quakespasm spiked, played on skill 3, this map is pure magic, its a true gem,didnt find all secrets, but wasnt really looking for them, enjoying killing gruntz to much.

Good map, but... - Symmetrical sections are too much alike. Like mirrored halls. - Quoth = Vermis final boss... as usual... Still, secrets and combat flow are fine!! Just... not much new, if you played other Quoth mods.