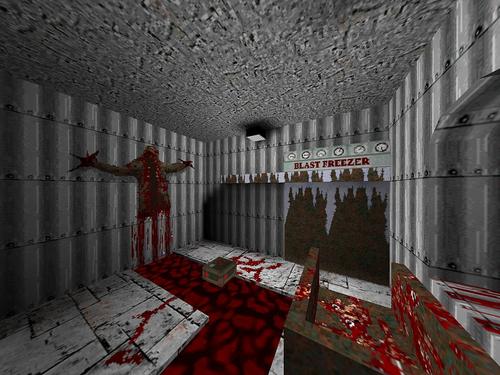 Thanks for that link, Gilgamesh. I second the recommendation – that is a nice review.

As for the map: it is very original in terms of both setting and gameplay. The slaughterhouse itself is appropriately bloody and gory, with lots of great little details all over the place, as one would probably expect from a Neil Manke map. Gameplay partly involves using the machinery of the place to kill powerful monsters (a bit like in spd's Cogs of Conflict) and partly finding your way around and through the abattoir in an engaging, exploratory fashion (and it is at least to some extent non-linear: I accidentally stumbled upon at least two very distinct routes at one point). Of course you get to shoot monsters along the way too.

Sometimes the gameplay works better in theory than in practice, though, as it can be hard to get the monsters to stay in the right place for the machinery to work – but perhaps that is supposed to be part of the challenge. Navigating the bloody drainage system can be somewhat frustrating too, as it is often really hard to see where you're going with all the red everywhere. Lastly it is possible to get stuck on certain buttons and you need to use noclip to get free (I am not sure whether this is an engine compatibility issue, though) and there is at least one instance where (as far as I can tell) you cannot get out of a pool of blood, as it is too far below ground level. There is a similar problem in Neil Manke's “Monastry” (although you do not have to enter the pool in slaughtr, though so it is less of an issue here), which may be due to differences in DOS Quake and modern engines, according to a comment by negke on a review of Monastry.

It is a real pity the map is plagued by these little issues, as they do detract from the overall experience. It is still worth a look, in my opinion, and (as far as I know) an underexplored theme in Quake SP.

definitely interesting. i also got stuck on those buttons. in the 'juicing' pool, i had to rocket my way out.

How am I supposed to open the door with the "Damn! Frozen shut?" message?

I think this was a super cool, creative, funny and fun map. It was fun operating the machinery, gibbing monsters and reading messages. A few nitpicks would be the slightly cramped spaces where it's pretty easy to get stuck in geometry and a couple of buttons where I got stuck upon pressing them.

Surprisingly I was able to get out of the rocket launcher pool. I was playing on Quakespasm-spiked and got up from the pool by hugging one of the corners of the pool while pressing the jump button, if I recall correctly.

For the time, I think the map is very novel and the whole slaughterhouse concept has been executed really well, from graphics all the way down to gameplay elements that the small nitpicks don't really bother me much. At the time of writing this review I feel like rating this 4,5/5.

Doubter, you have to open the door from the other side. Go to the room with the semi-auto-giber; run quickly through the chute next to the giber, go to the control room and press all the three buttons and continue with the map. You'll eventually come across the frozen door.

Hi, Esrael. I'm Doubter, now a registered user. Thanks for the tips. I'll keep them in mind when I replay this map, although I found it quite ugly and not very enjoyable the first time.