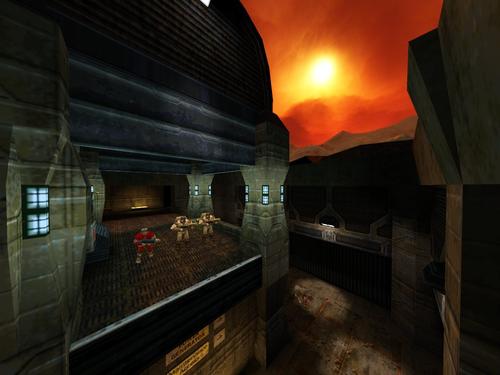 Slave to a Machine

Reminds me very much of Quake 2 and Half-Life... I would have given this a higher score but I think the difficulty or health items should have been a little better. I found myself with just 3 health on several occasions having to fight large packs. The actual design and everything though was top drawer, really attractive map.

Left me speechless too, fr3n, at first sight. Amazing and challenging map. Nice lighting job he did here as well!

Very good, has some semblance to Doom 3 and Quake 2, combined well.

I have a feeling that I started playing this a while back but somehow got distracted and never finished it. How stupid of me -- I missed an excellent map with a good sense of exploration. It just misses out of five stars, though, because some of the combats felt a bit routine and repetitive. It has a similar feel to the same author's The Hand That Feeds You, but without seeming quite as inventive. Still very well worth playing, and I would have scored it 5* before the current era of jams raised the bar.

BTW., I also did very badly at finding secrets: just the one for me, the megahealth and provisions at the very top of the map. I can't imagine where the others are, beyond the fact that the rocket launcher behind the bars is evidently one of them.

This map gets better the further it goes. To me, the beginning outside of the map feels a bit shakey, as movement in that area is strange due to the sloped floor and you're forced to fight a Fiend as one of your first enemies. But from then on, it just keeps getting better and better. The fuse-finding confused me at first, because it wasn't the sort of thing I was used to seeing in a Quake map, but it quickly made sense and encouraged me to explore the available area to find the fuse and where to put it.

I do have to say that this area of the map was one where the space afforded to the player worked against it; there was a lot of tracking back and forth for various stages as I figured out what to do and where to do it, and while there were some alter enemies spawned in, it was never in any significant amount I felt.

After that puzzle was completed though, the map becomes a fair bit more linear and the pacing smooths out, with the player fighting through a horde of challenging foes as they push forwards. I would say that from this point the map begins to suffer from its vertical nature, as it becomes increasingly frustrating to fall for any reason and have to trace your steps back to where you came from. If I hadn't fallen, though, that would have been a lot better...

I will say that this can be a very scarce map. Like others have commented above, I too found myself struggling for health and ammunition at various points, sometimes reduced to fighting with only a grenade launcher to clear the last few enemies before I could get more pickups. It seems strange, though, that this would be the case, as to say that ammunition is scattered few and far between would be incorrect; it appears to be plentiful, but the sheer quantity of enemies and their relatively high health means that you burn through your supplies surprisingly quickly.

The map ramps up the intensity of its encounters throughout, which leads to a hectic and intense firefight at the end that left me clinging for life as I entered the slipgate. Great map!

Excellent map. Great combination of textures to create an industrial/military base (no complaints of "nothing but brown" here). Good battles. Good health/ammo placement (on normal anyway). Fun!

Very good. True 'Quake 2' experience in the original 'Quake' formula - improved with the base of 'Quoth' assets, expanding the difficulty level by a significant margin. Great, grim science-fiction vibe of a decaying future, bathed in darkened lighting of dystopian, industrial base. I loved it, even if some 'Quoth' enemies, do seem a bit over the top with their endurance and firepower; but the monster design, is a treat. Where did you get that cyborg from - you 'Quake 2', look and learn! Reading the map description, I thought to myself: a model 'Warhammer 40K' scenario: a Space Marine, on a mission to purge the heretic and the transgressor. Nonetheless, that, did not interrupt the overwhelming 'Quake 2' vibe of a corrupt, out-of-control, infectious man-machine symbiosis, which was hauntingly omnipresent.