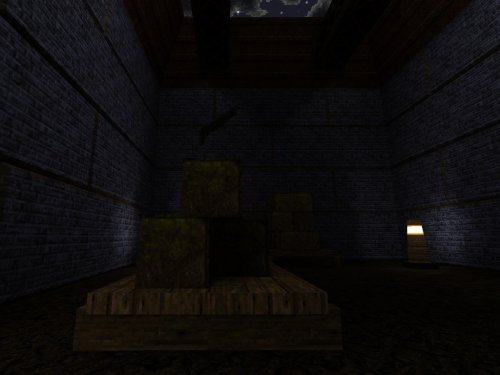 3.2/5 with 6 ratings
You can NOT add ratings
if you are not logged in.

Mine is BIG themed, there were 2 themes this time. I think i forgot to put that into the text file.

Btw, mine is a bit annoying thanks to the lights in the ground.

And also: Cocerello's is a QUOTH map. That can be so easy to overlook.

Nice map, Cocerello. The lights in the ground did not bother me much, and it was very atmospheric and certainly not too easy. I like the fact that you made generous use of one my favourite monsters: the voreling.

Unfortunately I encountered what seems to be a critical bug in the final arena (in Quakespasm): with the door into the arena blocked and nothing left to kill, I was stuck. I could hear a gaunt, though, and when I turned on fullbright I could see it, but it had failed to “wake up” and attack. When I shot it, a voreling also appeared, and when I had killed both, the map ended. But perhaps I had missed something. The readme mentions that it may be necessary to resort to using “fly” in the “puzzle part”, but I never encountered any puzzles.

As for the “Bricks” maps:

sm171_scampie, though nothing extraordinary, is a very decent small and simple map.

sm171digs, however, is the clear winner for me (even counting sm171negke, which has more interesting gameplay and would have come a close second, were it included in this pack). Though the gameplay in digs's map is nothing revolutionary, it's hard to imagine a better aesthetic embodiment of the theme. The final area in particular is just perfect.

Icantthinkofanickname, out of curiosity, i tested it again for you. The problem with the gaunt is more simple and more a typical speedmap issue: i forgot to check the direction the gaunt is facing to. I checked it too, the gaunt can be seen too without using fullbright.

The ''puzzle'' (i hadn't found a better word for that) is located on a part of the map where it splits into 2, the main path you took and a shortcut with lots of gooodies. You are encouraged to find it, and the 5 secrets. The ''puzzle'' isn't well tested, as usual with speedmaps, so you can get into the holes in there, that's why there is the part about using cheat codes in the text file. If you get stuck in the air, keep moving and you'll be put into the right direction again.

Hope you can enjoy the map better now. And thx for the comments.

Thank you very much for the response, Cocerello.

I have now played through both ways. While I did find two (very similar) secrets in the main route, the “puzzle” route does not seem to work for me at all … or I am doing something wrong. Once I enter the puzzle area, I am immediately pushed right through to the button that lowers the grate to the final arena, before I have to chance to do anything (or get stuck anywhere, for that matter).

Oddly, though, when I played through the puzzle route, the megahealth just before the final arena dropped down, whereas before it remained stuck to the ceiling (although I was able to grab it by jumping up and “touching” it). I also did not experience the problem with the gaunt this time. Maybe I inadvertently hit it, prompting it to turn around and start its attack.

Is there any chance of your releasing a polished version of this map? Either way, I hope this is not your last Quake SP release...

The puzzle is very simple and based on pure luck, the three routes lead to somewhere, but the other two lead to goodies and the one you took to the exit.

The MH is working as intended, as a reward for finding the alternate path, you getting it by jumping is another typical speedmap error from my part.

My last released map for now is it at Func_msgboard, in Sm173 pack. I recommend you Skacky's one. Read all the thread throughly.

Thanks very much for the recommendation, Cocerello -- Skacky's map is indeed excellent. Sadly I haven't had the time to play all the way through yours yet. So far it seems quite tough, but then again, I am a little out of practice at the moment.

Cocerello, I finally finished sm173coce, after several unsuccessful attempts. It is hard! FifthElephant likens it to a "rat maze" on the FuncMsgboard thread, and I have to agree.

Although not as clearly retro/id-inspired as Skacky's map, it does make one feel like an absolute beginner again; as lost as someone playing a first person shooter for the very first time. If that is what you were going for, you certainly succeeded.

It could, however, probably have been a little less confusing with a bit more visual differentiation between various areas, and a few more visual cues -- it was, for instance, not that clear which keys opened which doors.

Still, as a speedmap it is very impressive, and you certainly seem to have a distinct style. I like how the setting in both sm171cocerello and sm173coce is somewhat abstract. There is a distinct sense of being somewhere unidentifiable and otherworldly. Your maps seem to capture the weirdness of the Elder World (as per Tronyn's description).

I am looking forward to whatever you come up with next. Perhaps a full release, finally?

Icantthinkofanickname, thx for your comments.

I could answer you and tell you many things while continuing this conversation and i don't mind that at all, but i would like to keep this as just for comments for ALL the maps in SM171, not for personal chatting or as a personal mail inbox, so i would prefer to continue this at another place: Quaddicted's forum, by email, in Terrafusion channel, or in Func_msgboard sm171 and sm173 threads.

Cocerello, you are of course right -- this has veered decidedly off track. I see sm173_pack has finally been added to Quaddicted; had I noticed that earlier, I would have left my later comments there (although I am not sure exactly when it was added. It must have happened very recently).

I choose the Quaddicted forum.

I did wrote a lot back then haha.

Another pack i forgot to put my comments back then here too.

Played them on skill 2. Both are good examples of speedmaps, and solid for the time spent on them.

Digs: brushwork is very well used wih some neat tricks and some word references. Combats are a bit repetitive but ok for the lenght of the map.

Scampie: more conventional but still effective, and with a good and uncommon use for a secret.