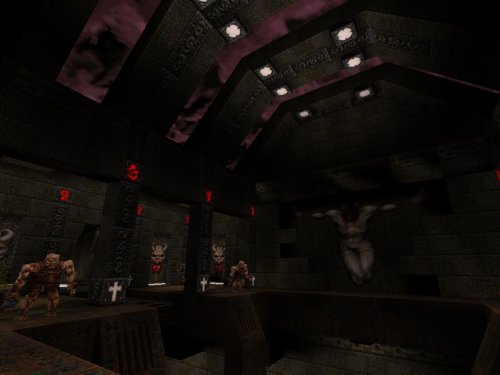 I'm glad this has finally been added to the Quaddicted archives. It's a very nice collection of speedmaps, although only one of them really does the official theme ("Quake The Way Id Did It") justice.

sm173_skacky ("Ghastly Citadel") : Very pretty, nicely balanced, varied and very id-like, it seems to distil an episode into one map in a similar vein to R.P.G.'s Quake Condensed. There are two secrets, the second of which I found to be a little too well-hidden, but your mileage may vary. There is also one area that feels like it should have contained at least an unmarked secret. You can get to it with a bit of effort, but sadly there is no pay-off.

sm173_digs ("Forest Hollow"): Wonderfully weird and decidedly Digsian, with bouncing baddies, trippy trees and peculiar progression, it is my personal favourite of the bunch -- even if is not as pretty as Skacky's map, nor follows the theme ... unless one interprets it as, in Shambler's words, "Quake The Way Id Would Have Done It If They Had Been Smoking A Lot Of Crack".

sm173_doomer ("The Corridor 8"): A fun map and decidedly old-school, although not exactly like old-school Quake. It is closer, perhaps, to old-school Doom (which is not that surprising, given the author's name). The least pretty of the four maps, but the second-most enjoyable to me (after Forest Hollow). The secrets in particular are great.

sm173_coce (untitled): A tough and confusing map, which makes the player feel rather like a rat in a maze (to paraphrase FifthElephant). As with Doomer's and Digs's maps, it does not really resemble id's original Quake levels, although it does perhaps convey the feeling of playing a first person shooter for the first time and getting completely lost in its labyrinths. Although I like the overall abstract aesthetic of this map, I have to admit it is the one I enjoyed the least, simply because it was so hard (at least for me). I also commented on it here (before this pack had been added to the Quaddicted archives).

Note: unless something has been changed since I downloaded this from quaketastic via Func_Msgboard, Cocerello's map requires Quoth.

Ok, the author's name has now been changed from "Various" to "Cocerello, digs, doomer, skacky", which of course renders those tags pointless.

Another comment i forgot to add here too back then. Better late than never, they say ... haha.

Digs: quite better than what it seemed at first. The map as a whole was Digs' typical but the outdoor parts felt more id1 alike. The ''trees'' are a good and fun idea.

Doomer: nice for a quick fun. It is similar to id1 in brishwork but not in combats, which are all of horde type, or in layout (side areas). It felt a bit empty even with those numbers.

Skacky: very close to what would latter be named short jam maps and one of the first, for a bit feels id1 alike but after a better look it doesn't that much. It is quite solid in both looks and combats, bu has some issues with Zombies, the size of the GK door, and with the ending. Would have fit better released on its own than on a speedmap pack.