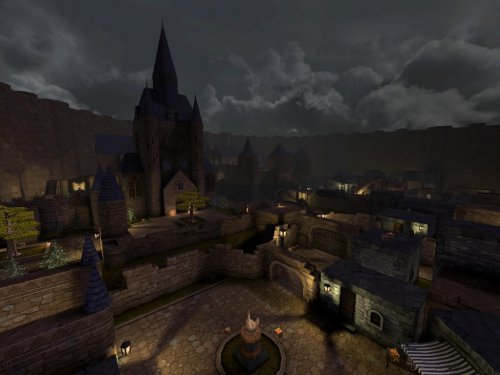 Secrets of the Keep

Huge town at nighttime with a castle and a big cathedral. It uses custom textures and comes with few new models, sounds, a custom skybox as well as a music track. The map source is included.

Very impressive map. At times you really feel like you're in a little village just outside a castle. Very good use of the little spaces between buildings for secrets. I'm quite proud of myself for finding 15 of them. :) 5 outa 5.

Nice textures. Monster count was sparse on normal, didn't play harder as I found problems. A lot of the time I could not fit in certain alleys or access areas of the map no matter how I wandered. Eventually I resorted to noclip and saw lots of inaccessible (to me) areas. Had to noclip further to progress, found gold key first, used on door, later noclipping again to progress (this happens a lot), found silver key but never anything to use it on.

Finally. I never found the exit/end despite noclipping around. Strange map, don't know why so many problems. Have played a million maps, on rare occasion I hit ones like this. shrug

The map is well crafted but I have some complaints. The map doesn't do a good job of guiding the player. I often went to find supplies/secrets in narrow and dark spaces between houses finding a new bunch of enemies telling me that it's the main route. Also I got lost a bit after grabbing SNG. There was no clue of where to go next. I started wandering in the streets for some time until I ran into a bunch of enemies in the square with the same min-shub statue as in SNG square (at first I thought that I returned to the SNG square).

In the maps with such an interconnected layout it is necessary to guide the player: lights, arrows, monster trail. There's a lot of ways to do it. The best way is by using landmarks so the player can always define in what part of the map he is and where he needs to proceed further. Current landmarks don't do their job well cuz they are always somewhere really far between you and the samey looking streets.

Despite all of this the overall effort put into this map is really impressive. I'm looking forward to see the next map!

Okay, I'll admit I got lost a few times at the start, but I now realize that this will be one of my all-time favorite levels. It's up there with Something Wicked and the Marcher Fortress for replayability. The architecture is multilayered, attractive, and accessible in a way I find very compelling. In other words, I loved it!

Very nice, atmospheric level with good use of the fog effect for diminishing light. It really did feel like you were in a village, running through and above it, trying to make your way out. The darkness could at times get overbearing, but that is part of the effect.

There were times I was a little unsure of where to go, but I never got lost to the point of frustration. If there is anything that could be improved, it is the use of landmarks and unique areas. Often I found myself someone I had been, but unsure at the beginning if it was a new area which looks similar, or the area I was.

Amazing architecture and pretty nice gameplay, if a bit on the easy side, even on nightmare. What really makes the difference here is the incredible atmosphere and sense of place, totally immersive. I got a strong resemblance to the Attack On Titan anime, with the huge outer walls and village. Truly amazing. Well done. There are a couple of heads up to be had, though: the very open layout of the external areas allows for several potentially game breaking choiches. The one to be aware of is if you manage to get into the blue key chapel breaking through a window, you have no way of getting out, so beware that. Also, the final fight can be approached in several ways, even skipping a large part of the monsters but the exit only opens after you've killed all the Minotaurs(I think, as there's no counter). So if you find the closed doors, you need to go back and hunt down the monsters.

Went in blind, was not expecting such a huge level. Beautiful streets littered with details, and a fun layout that unfolded organically (although I got a little lost at first). Thank you for the awesome map, I had a blast!! (nightmare)

IMO this is one of the best "castle maps" out there.

Great ambience -- the sounds, music track, architecture, and vistas give it almost a Thief 2 vibe which is enhanced by the fact that you do a lot of climbing-up and dropping-down to get into places where "you're not supposed to be". Overall a strong sense of going-on-an-adventure that reminds me a lot of Axebeard's entry in the Sewer Jam, except this is on an even larger scale.

The fact that there are "only" 250-ish monsters on skill 2 for such a big map is a reflection of good pacing (for my tastes). None of the fights could be consered horde-y until maybe near the end, but there's some nifty monster mixing and placement that make the fights fun. A couple of times I even reloaded purely to take another whack at doing a particular setpiece in a different way.

I love the way the map opens up in particular manner as you approach the end, and the way it leads you back to the exit once you have your full arsenal... I guess I won't comment more on either of those for spoiler reasons. Only to say that a lot of apparently inaccessible areas become accessible in a way that will seem obvious in retrospect.

I can see how some folks could get a lost a bit in the early-to-mid parts of the map. FWIW I personally had a good time with those areas; the intermittent stretches of multiple-pathing gave it more of an exploring feel, and it let me work around behind or to the side of some monster groups to pick at them. I think the fact that the streets give you visibility of some landmarks helps; also that they are "characterful" and not just interchangeable hallways. The only thing that tripped me up a bit was that two different courtyards have the Shub statue, and since I had glimpsed it in one courtyard from a doorway (without entering), when I got to the other courtyard I thought that it was the same place I had seen before which screwed up my mental map for a while.

Anyway. Great trip. :-) I think Maxx's Xmas Jam 2019 map was also a little castle which was very cool, so he's definitely got the chops for this theme!

No idea what some of the people here complain about, hard to navigate? This map is pretty easy to navigate with new enemies popping every now and then to show you the way, and even without them it's pretty straight forward.

Quite good, look and feels like Thief game. Sometimes complicated but a minute later very easy to maneuver.

Got a half of secrets, but in the end I was not sure where to go, needed to take a vantage point and look where enemies spawned, then from one to another I found an exit.

A bit hard to navigate before the action really started. But afterwards, it's good action.

During one of the final showdowns, a Gaunt wandered off and a door that triggered the final final showdown wouldn't go off until I hunted him down. Otherwise, fantastic map. A nicely realized castle town that I wish went on longer.

I really enjoyed the sense of exporation with this one, even though the darkness didn't add much — in the end, I just turned up the brightness. I liked the sense of progression — unlike some earlier commenters, I always felt that I knew where I was, and where I needed to go next. And the restocking of the main city area with distant and high-powered enemies was a fun opportunity for careful sniping-based combat. I finished with 245/247 kills, infuriated to have missed two; but only 15 of the 21 secrets.

For me this falls short of five-star status, though, for two reasons. First, some of the combat feels a bit workaday, and lacking creative opportunities to kill things in clever ways. Second, and more important, an awful lot of the secrets were useless: all those ones where you have to fall down into gaps between houses to find a Ring Of Shadows or a Sharp Shooter are only available one you've reached the rooftops, by which point you've already killed all the bad guys nearby and there's no-one to use the goodies on.

Still, lots of fun, and really benefits from being AD.

was not a fan of this one, from a quake player's perspective. battles were boring and extremely unimaginative. nice to look at, not fun to play. reminded me of the overly-large level design of many PC games from the early 00s.

Really cool. One of the best maps I ever played. I didn't expect that, because the screenshot is not representing the real quality of map. 10 out of 10. No complaints at all

An amazing and wonderful map! Why I didn't see this map in 2020? But! There are mistakes in secret places with inverted Christmas trees. And it is in almost all secret places. I have all the buttons and doors that should have a golden glow have a bright blue. Maybe this appears only to me because I use improved HD textures? 5 points out of 5!

I had one problem when playing this level, which was missing when a new section had opened up to me, -however-, the absolutely stunning level design and artistic ability on showcase easily outweighed those few minutes where I was checking for new alleyways or an opened door. The escalation of both monsters and weapon loadout was well paced and left me seriously wanting more by the end of the level. 5/5 looking forward to playing more maps by this creator.