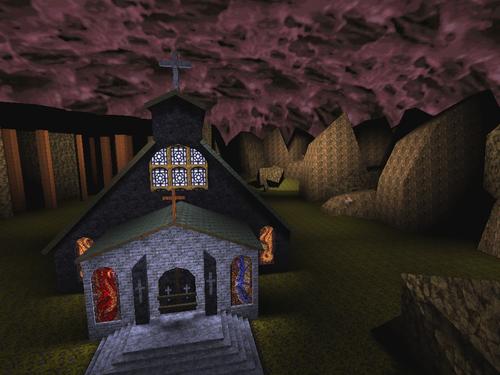 
Qmaster 23 December 2010, 17:55
Lame and somewhat boring
madbringer 5 February 2012, 19:12
An excellent showcase of early Quake modding creativity and ambition. Might seem primitive and easy by today standards, but still definitely worth a try, if for that old nostalgic feel.
dBAudio Registered 19 October 2013, 0:36

this is tough (for me), but i'm enjoying it!

I played TDK today. This mod is very hard, (even "god" command has no effect), but interesting. Only "Noclip" works. But I like that Hell Knights and Soldiers may leave near themselves green or blue armor when dying. It's a very good feature, i think. And what about you?

But there were problem that I could not find castle key. Can anybody give me a screenshot or video of how to find the key and where it's located?

I lost all patience with this. It works as an advert for the existence of Quake C, but is not an advert for the idea that it should be used. Every single change made to the base game is a change for the worse: monsters with arbitrarily raised hit-points, counters that always claim 0/0 kills and secrets, fast fish, the ability to go back and forth between levels whose supplies respawn but whose monsters do not ... all of it feels awkward, plus the build quality in the opening village is poor.

Like AlexQuaker, I couldn't get into the castle, despite the existence of the long underwater river that surrounds it. And I realised I just wasn't enjoying the process of trying to find it.

Sorry, TDK team. I know you worked hard and meant well, but this is just not fun.

This is really frustrating. I can't even find the blacksmith's shop at the very beginning. And I only know I have to find it because I'm reading the walkthrough.

Well, what a mod! 1997's release... old one, and kinda unique. No horde battles, no AD-level beauty, but very special type of progression! It's basically an Action/Adventure, very similar to Hexen 2 in terms of gameplay. So no secrets and counting killed monsters. Expect interconnected maps with a lot of revisiting, texts scattered throughout, and WTF-where-to-go-feel all over this package. Puzzles, traps, looking for ways of progression...Yep, reminds of Hexen 2, even too much... No new weapons or monsters, though, except two final bosses, one of which is just a red-eyed version of Fiend (still a good fight, since it's very, very strong). Overall, I enjoyed it, despite the maps being boring and very simple. Fans of Hexen 2 should try this out!

8 years later, I feel like I need to revise my review a bit. This project deserves all the praise it never got. I have confirmation it was a direct influence on the Thief series of games; say no more.

It's crude, it's a bit confusing, it's not polished. It's still genius. This will forever be one of my favourite Quake mod/map packs.