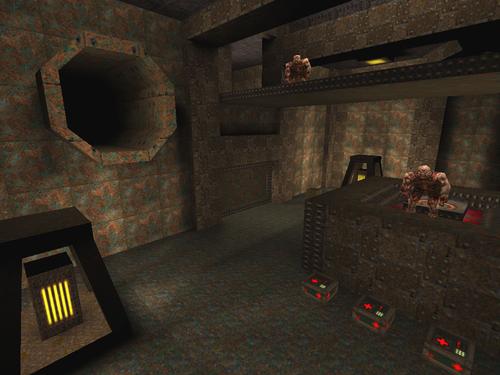 Not as pretty as tfl but gameplay wise another classic. I love all the switches.

Most enjoyable, in a very old-school way. Mind you, going through such a contrived pathway does make me all the more aware of how very far more recent levels have come, with their sense of logical progression through a real environment. Still, a solid 4/5.

Not as detailed in brushwork as the previous one but it has gotten bettter at gameplay. To highlight, the jumping enemies and combat situations, and even better ammo management. There is still some harmless enemies but for half of them it depends on playstyle. On the bad side, a contrasted lighting on the water part will help a lot into knowing where to go, as everything looked the same.

Another great map from this level designer in that uses the windpipe level theme from the original quake. It has great combat, varied secrets for the player to discover, and interesting level design that is not confusing to progress through. I would highly recommend downloading this level and would give it a four out of five rating.

I largely agree with the previous reviews. It plays really nicely and stylistically looks really faithful to the original Wind Tunnels map.

My only pet peeve is the secret design, which feels rather unimaginative and tacked on. In fact, the secrets left such a sour taste in my mouth, that it actually lowers my rating of this map from 4+ to 4/5.

WARNING: A rant and mild SPOILERS on the secrets follows:

They're all of the same type, where you need to find a small shootable red button in some hidden corner of the map. I've always been bad at spotting these buttons, be it an old or a modern map, and I hate them.

To exaggerate a little, they're basically the same as some of the secrets in Wolfenstein 3D, where there are no hints going for them, and your only option is to hump random walls, but in this case, you try to "hump" all the nooks and crannies of the room with your eyes.

Although, to be fair, 2 of the 3 secrets at least have you see the rewards in plain sight, which informs the player when to start vigorous button searching. But the third secret, if I recall correctly, didn't hint of its existence anywhere.

I prefer secrets that are more intrinsically incorporated into the architecture or the mechanics of the map, or better yet, have you solve a more involved puzzle. These kinds of tacked on buttons just don't cut it for me. Ok, rant over. xD