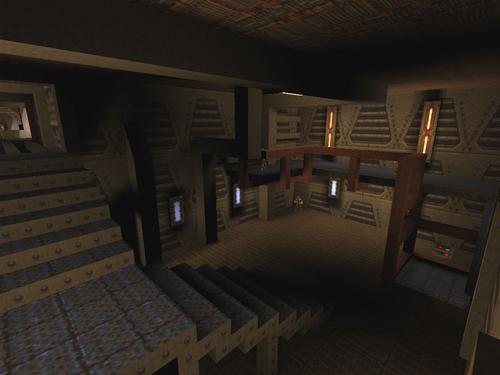 Very nice level, too bad it's so short.

TMI can be summed up as an above average map with great flow and some great brushwork but it really could've used a little more enemy and weapon variety. I would've loved a longer version of this. I think it's worth checking out, if not for the challenge then for the cool custom trap gun and the last room.

Short, unremarkable but fun, if you like the shotgun toting bad guys, they're here in spades.

Extremely impressive for a 1996 map! The level of detail on the map reminds me of SOA base maps, which are dotted with lots of machinery, some of them even moving.

The gameplay was well balanced, in my opinion, but I'd say ArrrCee's right about the variety. Maybe a few of the Grunts could have been replaced by dogs, and maybe a nailgun could have been placed in a secret. Maybe other weapons were planned to be placed in the following (non-existant?) maps of the trilogy, and this was the first map.

But as stated previously, I'd say the greatest... SHORTcoming of the map was its duration. But what we did get was pure condensed sugar; extremely sweet. And I'd rather have it that way than a super long but bland map.

well constructed 1996 base map that ends rather quickly but has excellent texture and brushwork. This is a good example of how a person can build a solid base map for quake using this map as a template. Overall well done map that gets a three out of five rating from me.

Ditto to what ArrrCee stated above. Pretty impressive little map, considering that it came out a few months after Quake's release.

It's a fast map to play through but well designed. I was down to low health a few times so it was fun.