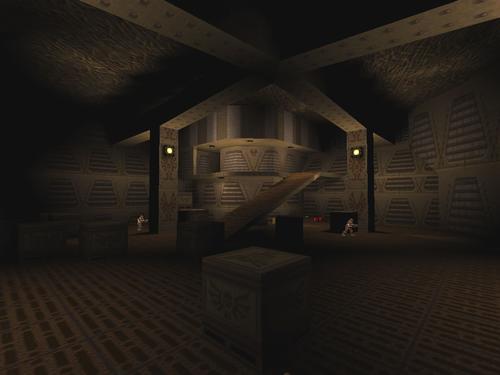 Fairly large, plain base level with a flying enforcer and non-linear gameplay.

3/5 with 6 ratings
You can NOT add ratings
if you are not logged in.

Played on skill 2. All killed.

An overall improvement over the previous map.

This map tries to fix the issues of the previous but can't execute well the solution: while it fixes the crampedness the map feels a bit lifeless, the ammo issue was fixed ans no longer the route taken first is important but there is an overolad in ammo, the flying enforcer got some improvements but its not placed well to its strenghts, the brushwork has definitely improved overall but there is less interesting setpieces, the combats have better places but have become a bit worse, with enemies that can't attack as well the player, the mapped gained tons in solidity but lacks in originality and ideas.

Overall, it is the typical issue of 20xx map compared with 1997 maps: got more solid but lacks in spice.

Very good mini mod for quake if you like industrial themed maps in quake. It has nonlinear level design and there is plenty of guns and ammunition within the level to deal with the enemy forces. I didn't notice to much of a change in the behavior of the enemies as detailed in the text file within the mod. Any way i would recommend downloading this quake mod if you are looking for something that is quick and easy to play through while providing you with a new custom game play experience. I would give this mod a three out of five rating.