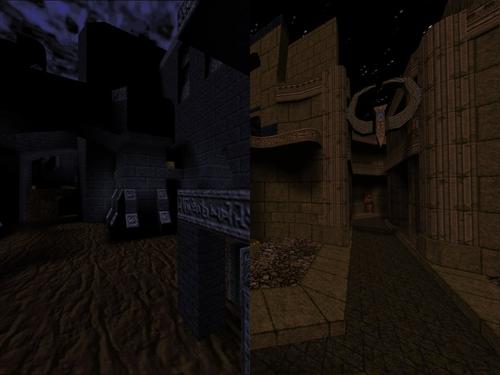 Two maps build from the scraps of other mappers: Hrimfaxi used Drew's scraps for a large egyptian/mayan map called "Egyptian rhapsody!" Zwiffle used czg's for a ikblue map called "Teacups - are my intentions".

On Nightmare, there are 250 monsters, wow! 8 secrets and some of the most beautiful architecture I have ever seen in a Quake level. I hope the author is making commercial games these days.

Played the level on coop mode, there were no bugs or issues.

We were not able to find the teleporter up to the Pentagram -- anyone know where it is? My friend helped boost me up to the area below it, and then I grenade jumped up to the Pentagram secret, but it would be nice to know what the "real way" to get it is. It would have been very useful in that giant open area full of monsters, for sure!

If you want bigger maps, check out Warp Spasm. It should be amazing fun in Coop.
MegaQuaker 23 April 2010, 4:10
Hrimfaxi's map is huge, the other is small. Both are good. Also it's challenging, I was caught by surprise in desperate straights a few times. Anyways this is EXCELLENT!
Aen 9 October 2010, 15:17
Excellent, Just Excellent!
dBAudio Registered 15 October 2013, 23:14

both were great. i prefer the size of Drew/Hrimfaxi, and love the ikblue used in czg/Zwiffle.

Good but got great.

Egyptian Rhapsody is huge, yes, but a lot of the size is of the Big Open Space kind. That's not to say there isn't plenty of fine architecture, too, but it's not quite consistent enough to rank with the best maps.

Teacups is technically good, but sort of irritating to play: lots of ambushes from the kinds of enemies that it's pretty impossible to escape without taking plenty of damage. And after a very difficult just-before-the-end battle, the actual ending is very anticlimactic.

I was very impressed by the architecture in Teacups. The blue castle theme was well realized. However, the lighting in the level and monster placement really threw off the flow of the map. It is probably a great DM map.

Egyptian Rhapsody: Nice-looking aside from the Egyptian texture theme, which I'm not a big fan of color-wise, though this is personal preference. I'm also not a fan of the big open spaces; I feel this works better in Doom, where you can cover ground more quickly than in Quake. Because of this I found the endgame sequence better-realized in gameplay terms than much of the rest of the map.

Teacups is nice. The lighting is very dark (which I like) and ikblue textures are always a treat. It's a real shame about the lack of difficulty settings, though. I found it pretty easy for the most part (other than a couple ambushes like Mike mentioned) which really holds it back from my point of view, unfortunately.

Egypt is superb...I love the open spaces and getting the monsties to fight each other...

5 for Egypt, 3 for Teacups. The former is grand in scale in gameplay. Beautiful architecture using MP2 textures quite nicely. The level design is great, with plenty of open space, and the Quoth monsters are used sparingly & reasonably. Teacups is solid but quite small and unfinished-feeling in comparison. The only frustrating difficulty I faced was that somehow I couldn't find the exit after killing every monster and seemingly exploring every corner.

I'm giving this one a 5 for Egypt; it's beautiful, well designed and well balanced. I'm not nearly as impressed with Teacups, but it wasn't "bad" and I don't want to ding this collection. Egypt was just that good.

Teacups is very moody, love the overall darkness, but gameplay-wise it's a collection of dick moves: - no armor whatsoever to protect the player, especially when there's so many hard hitting death lords/guards to fight in cramped spaces. The early SNG and profusion of health alleviates this a bit, but still... - impossible to evade ambushes right in your face - I'm thinking specifically about a certain double ogre sandwich. I ate chainsaw quite a few times in this one. - teasing the player with a LG pickup very deliberately put outside the playable area. I mean, WTF?! Thankfully the map is short so it doesn't overstay its welcome. Much.

Egyptian Rhapsody is much, much better. Sprawling and jam-packed with 250 baddies to obliterate from existence, challenging but not unfair, rewarding exploration with useful secrets, this is pure goodness. Nice architecture, too. Still a few nitpicks though: - the skybox is NOT included in the zip, so you'll have to search for it and install it manually. Hrim already did the same (no)thing with a previous map. Tsk tsk! To anyone wondering, you can find it in the jam 2 release, so just copypaste it from there. - some textures are stretched or oversized, making them look much worse than they should. - the rockwork could have used a little more, uh, work. It's the same kind of basic stretches of purely vertical surfaces that id made 10 years earlier and somewhat clashes with the significantly more detailed buildings. - Despite my best efforts, I was unable to find one of the secrets, even after getting pissed off enough to resort to noclipping through the map.

WTF?! I did press return at each of my bullet points, so why do they all follow each other as if I hadn't? This site very badly needs an edit option.