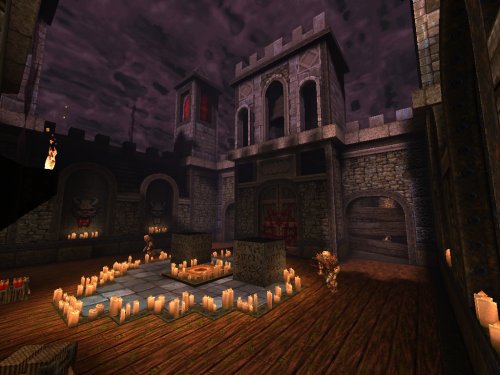 Candles of the Damned

Remake of E1M2 from Quake: a medium-sized medieval castle with many candles. The map was previously released as part of Halloween Jam 2. Among other things, this version features even more candles! Comes with a new bat model and some ambient sounds.

Great new version, and thanks a lot for the secret finale! I almost quit at the beginning when I realised I had already played that map, and I'm glad I didn't.

Out of the water, its a great map, but lots of water, its my thing only, hate playing quake, where you have to be in the water a lot of times,swimming to god knows where, and no oxygen...without water 5 with it.2

Based on the layout of e1m2 its an awsome map, excelent through and through.

The screenshot says it all, really.

Years ago, I made the mistake of thinking that Quake has successfully skipped its own version of Doom's overdetailing era. It probably had something to do with the lack of mainstream interest in the game. Darkplaces crowd feels separate from this place, much like the Doomsday community does not overlap with the primary mapping scene of Doom in any meaningful way. Doom, however, always seemed to enjoy a greater flow of new content, which means attracting ambitious amateurs in larger quantities, which would ultimately influence the community-specific design language.

All the signs are there. I'm not even talking about the venerable "every brick is a brush (and every book is a bunch)" mapping principle. It has little to do with complexity. This map, for instance, is very clean. But look at those impeccably rectangular details carefully aligned with the grid. Curves that have no excuse being this curvy in an environment that doesn't just look decaying, but pretty rugged to begin with. And that perfectly symmetrical sign on the door - probably an accident, but it's a great analogy for this rigid and unnatural kind of design.

I don't want to discourage people from making or remaking things for Quake. But I hope that this will be a starting point for something more ambitious than adding curves and rectangles to an already rectangular layout.

Lovely to revisit familiar places and see them so completely transformed. This version doesn't seem much different from the one in the Halloween Jam, but I was more than happy to play it again. It'a a little frustrating, though, to have finished with 106/170 kills — presumably one of the five secrets I missed concealed a horde. I wonder if they spawn when you pick up the quad floating high about the altar? Oh well.

Nice reimagination of the old classic in an "Arcane Dimensions" style; definitely ramps up the difficulty level on higher setup. For the first sight after the map loading; have you ever listened to 'Limbonic Art', album 'Epitome of Illusions'? Gave me an immediate vibe. Loved the candles; heavy reminder of certain 'Dead Space' aesthetic elements - some lighting aspects, particularly at the shrine, did ring a bell in that direction also - albeit, I do understand how it is rather inappropriate to mention 'Dead Space' before 'Quake' in terms of influence continuum. Just, stuff in my head, that it goes. The bell effect, was great, but I have an impression that I know it from somewhere; was it not something with 'Warhammer 40K'? I must have heard it in a trailer of sort.

For the extended gameplay, I have not found my way to access it; perhaps a hint then?

Awesome level. Well balanced and fun to play. Super nice optional secret. Someone complained about the water parts, but honestly they are very well designed, with enough special sections to breath, but not so obvious as to keep it challenging and force you to venture into the unknown.

Hope to see more of this.

Great. 5/5, of cause. I like to swim. Mostly in Quake. Playin' easy, as mostly, I have kills 75/124 now, and secrets 13/15. It wasn't so difficult, to get the quad, and with a li'l bit more of thinkin' I even got Zigi's nail piercer. I can't find the above mentioned uper nice optional secret and will give it some more time before I look the educational video :-) on youtube. Thank U, Comrade. ludicrous.

This is an absolutely awesome map. Be sure to get all the secrets, for "extra" fun >:)