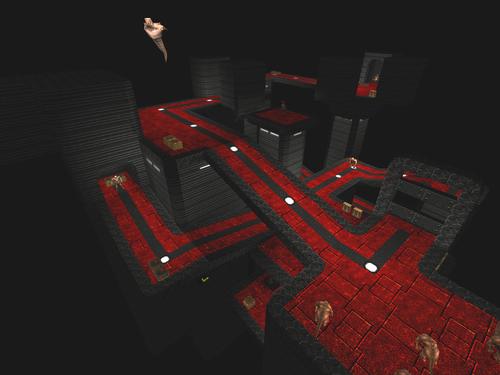 "This contest was run mid-September to mid-November of 2001, with the goal of creating maps in the tradition of Tim Elek's 'Coagula' series of maps - a series of structures floating in the void. The contest was run by Tronyn and the judges were Fern, Grindspire, and Xenon. The contest also includes a bit of custom QuakeC code, which was done by Necros.

There were 5 entries: Tronyn(2), Fat Controller, Dilvish, and Necros. In addition, a start map created by Tronyn is included, as well as the original Coagula series by Tim Elek."

User Rating: 4.1/5 with 16 ratings
You can NOT add ratings if you are not logged in.
Lord Graga, rated this a 4 30 December 2011, 13:15
Overall a pretty good run through. The original coagula maps had a certain charm, and I was happy to see a well placed quad in the second one. The third one had some really weird red texturing that (at least on my setup) didn't really blend in well with the rest of the map.

The winner of the contest had a sort of frustrating layout with regards to sequence buttons.

Necros entry (shared third place, to the left) had a really good atmosphere and some good puzzly part, but did suffer from a little confusion at times (which ended up being alright once you "got" the map).
S. S. 4 June 2012, 2:26
This was a solid pack! I'd play it again for sure... sooner than later.
FifthElephant Guest 19 February 2013, 13:52
Very good fun! The only slight problem I have is with the lack of care with the overbrights on textures. I'm guessing in 2002 that people were probably still using glquake and such.
Lane Powell Registered, rated this a 4 19 April 2016, 21:12

I'm a bit surprised at the choice of winner--I would've personally vouched for necros's map (which has a standalone release) although I suppose it's not really a "true" coagula map. Nice to see that Tim Elek's original Coagula trilogy was included.