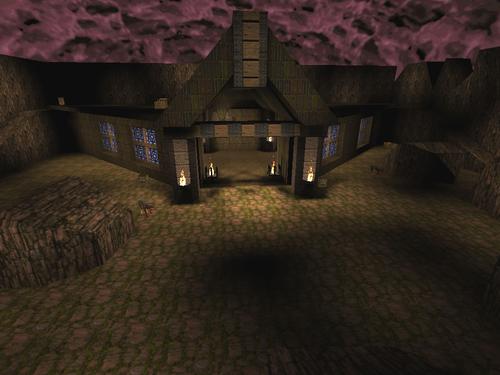 Pretty unremarkable, but still quite competent for 97. Lots of low-health enemies makes having 200 spikes and a SNG a ton of fun.

Quite interesting: the gameplay is nothing remarkable, fun even if a bit bad sometimes, but the implementation of the idea and atmosphere stand out, as something that coul have come from an Alien or Alien vs Predator film. Overall the map is solid and only some texture alignment on angled faces has problems, which was normal back then.

This is also quite different from previous maps by the author, mostly his brushwork style and abuse of items stand as a hint of his style.

I enjoyed playing this map for its varied architecture and its interesting level design. I found the variation of themes that this map presented {midevil, and base} made the map very unique for its time. This map is probably the level designer's best released map thus far. I would highly recommend playing this map and give it a four out of five rating.

While the map doesn't shine in any particular area, all of the individual elements (including the story in the text file) make up a really satisfying whole, that is greater than the sum of its parts.

I found the level design interesting and it had some cool setpieces, such as a generator thingy of sorts with lightning arcs. But the most memorable part was the main hive itself, complete with hexagonal compartments (kinda like in an actual beehive) that "hatched" vores. That was also the most interesting/challenging combat scene, which were otherwise rather easy.

Overall, a really nice map, that I had a blast playing through. I think I'd rate it 4+/5 (and since at the time of writing this review the average score of the map is below 4, I'll round the 4+ up to 5/5).