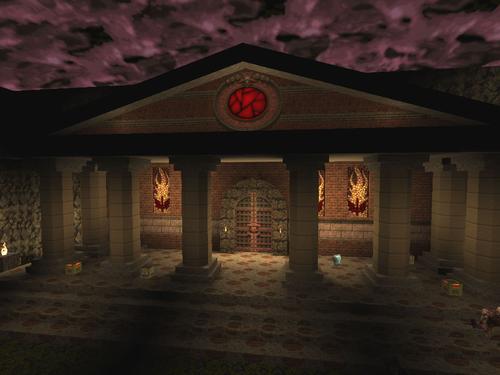 Played on skill 2. All kiled and all found.

Above agerage in brushwork and with lots of details, branching layout with plenty side areas and strange progression, mainly straightforward combats, overloaded in ammo and health, easy to find secrets but nevertheless feel rewarding.

Yes, slightly confusing, finding the gold key door took me ages and it was easy to figure, but the rest of the progression and layout is no problem, and good to go, as long on as finding easy secrets to progress is no problem, which happen once or twice.

The map its part of a series but it can be played as a standalone, as it is overflowing with ammo and weapons, same as on the secrets.

I like ti mainly due to the layout, the originality in some mechanics and progression and the combats.

In terms of looks I'd say this map is a step up from the first map. Even though the brushwork remains simple, the texturing is tasteful and the lighting creates great atmosphere.

The combat, especially, if you continue from the previous map with all your high-end gear, isn't particularly hard, but the author has countered your gear with enemy placement and surprise teleports that provide a pretty good challenge. However, depending on your location when the teleport ambushes occur, they can feel pretty cheap, and they ended up killing me once. Otherwise the combat was quite fun, actually.

As a whole, the map feels greater than the sum of its parts, and as of the writing of this review, I feel like rating it pretty highly.