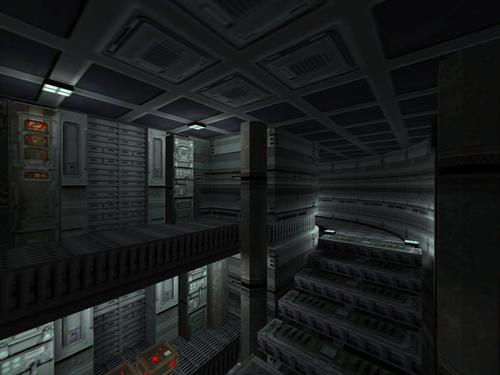 Basically the same as src but using Quoth 2. Slightly different layout and gameplay.

4/5 with 14 ratings
You can NOT add ratings
if you are not logged in.

i use fitzquake.085. this map is good. but... i rated this a 3 because i got lost in the 'slime' WAY too much. couldn't see anything with the envirosuit on. i was so frustrated i used r_fullbright to find a path to proceed.

Yes, I had that experience, too. Other frustrating elements of combat meant that, however cleverly put together the map is, it's just not much actual fun. 2/5.

I really like the look of those D3 textures in Q1, good job JPL! Map layout is neat, combat maybe a bit tad, quoth is a special flavour..

And that slime part was indeed frustrating! Still good though!

A nice map; quite challenging but not overly difficult.

The slime section was a little confusing, though not as bad as the comments above made me fear (perhaps it helps if you expect it to be tricky). I actually think it adds an extra dimension to the map, although I believe respawning biosuits like in RickyT23's e4m1rmx or negke's Bad Dark Cistern would have helped make it a bit more palatable to most players, by alleviating the time pressure to find the right route (which forced me to save and reload until I had it figured out).

The map looks great (despite the player's spawning in a rather unflattering spot, with a rear view of an aircraft that is probably best seen only from other angles). Like mfx, I also really like the texturing. I disagree with Tronyn regarding the lighting, however. It is a very atmospheric map, but would have been more so with a bit more contrast; as it stands, the lighting is somewhat flat and uniformly dark in many places.

The quoth enemies are tough, but the map's layout gives the player the opportunity to take things at their own pace (as opposed to the large open areas in Cheyenne Mountain Complex, which force you to deal with several monsters at once). It would arguably have been better not to be attacked from the second you load the map (skill 1), though honestly that did not bother me too much. The only real complaint I have here is that the nail ogres, with their decidedly medieval-looking chain-mail tunics, felt very out of place in this high-tech environment. I really enjoyed the flying drones, though, especially where two types were used simultaneously -- it was fun to provoke infighting between the Bobs and Sentinels.

Overall a 3 plus to me. I would certainly recommend it, but based on the other comments, I guess your mileage may vary...

Isn't there a command to make fluids transparent when you're immersed in them? I can't find it now.

I loved this one overall; my main complaint would be the slime, for all the reasons given above. I'll admit I couldn't figure out how to turn off the laser bars to get to the energy weapon secret; thought I tried everything, but I must have missed something. Overall a good map though.

Great ambiance, very poor gameplay loops; I did not finish this stage - mapper expectations of a player approach, are perhaps a bit overoptimistic. Ambiance alone, would have to be truly unheard of, to sell a game by own effort.

I really liked the interior design, which felt like I'm in a spaceship or base or kind. I never really played Doom 3, so I lack to recognize any similarities. Gameplay and Opponents on skill 2 were overall suiting, while the Acid Tunnels where quite challenging, since their so dark. It did take me some attempts to reach from one end to another. I found just 2/7 Secrets. Enjoyed 5/5