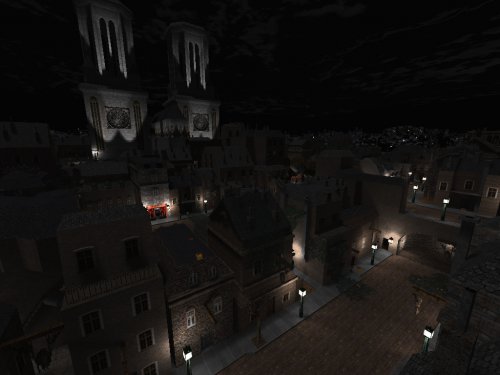 Redux version of the previously-released Ter Shibboleth Part 1 and Part 2, featuring various changes including a port of the first five maps to Drake.

Episode with eight huge, uniquely themed levels: a beach resort under a Golden Gate Bridge, a puzzle map set in an industrial storage facility, an Asian temple, a twisted otherworldly fortress, a desert mining town, a snowy village in the mountains, the city of Paris (complete with Notre Dame and the Eiffel tower), and an ancient Roman city next to a colosseum. Most of the maps use custom textures; the texture wads and the map sources are included.

Note: These maps require an source port with severely increased limits and BSP2 + protocol 999 support, such as Quakespasm 0.93.0 or higher. The memory heapsize needs to be set to around 1.5 GB!

Even with heapsize set to 1.5gb it will not run

Does anyone actually like those blue assholes from Zerstorer?

@dwere The blue enforcers? I like em. Once you know their attacks and the shield goes down they are easy to take out. Double barrel shotgun does the trick.

Possibly the worst map set ever created for Quake. Unrelentingly terrible in almost every way, with a vague sense of impressiveness in just how much confidence it must have taken to complete and not realize it's inherent badness.

Each level learns nothing from the last, each one is a completely optimized mess of brushes that offends the eye as much as the gameplay offends the senses. It's hard to say just what is so poor about it, but I can say with certainty that I would rather play Anoxia a million times before "playing" these again.

Well, thanks for reminding me to finish typing up my scattered thoughts on this release.

All maps here are huge (at least in terms of scenery, though often in playable area as well), but there's a mix of very "sandboxy" levels and levels with a more conventional structure. The sandbox maps include a desert town (fifth level), some kind of post-apocalyptic Paris complete with Eiffel Tower and huge demonic corpses bursting out of the pavement(7), and a abandoned Roman coliseum and surrounding complex (8). These maps all have open layouts with multiple widely-spaced key items to track down. I think these are the most successful because their gameplay matches the maps' size and scale: there's a lot of ground to cover, a sense of open-ended exploration that's more familiar from other games than from Quake and which makes you feel small, but also you're surrounded by MORE space that's not accessible but makes you feel smaller still. I think this is why these maps work so well. The other levels feel more like large-scale versions of "normal" Quake levels that stand apart from each other in their distinctive themes and gimmicks. I've commented before on my love for Blasocuyst (2nd level) with it's huge puzzle room, as well as the fourth level's dizzying and surreal take on the wizard theme.

With maps this huge there's always a risk of having too much 'empty' space, and I feel most of the maps here fared pretty well. I would maybe cite the first level (the island resort) and the sixth (the snowy mountain/village) as possible exceptions. They are both pretty wide-open once you get past the initial location, but have large areas that are essentially skippable and kind of repetitive, not particularly interesting in gameplay terms.

Thematically, the maps are a weird mixture of realism and abstraction. There's nothing linking the maps thematically except how out of place in Quake's universe they are. I mean, "realism" is not alien to Quake, neither is unusually otherworldly approaches to standard Quake themes, but it's strange (in a good way, I think) to see them in a single release, sometimes even combined in one map (the wizard level looms over scenery that is essentially a collage of photos of war-torn cities; the huge corpses in otherwise realistic Paris). Taken as a whole it creates a kind of uncanny effect. I'm reminded vaguely of the Doom WADs produced by a Russian team called Clan B0S, which also combine realism and abstraction in their layouts and aesthetics, to different (but still uncanny) effects. They also, incidentally, have drawn a similar mixture of praise and condemnation from players...

Gameplay-wise the maps are generally pretty tough on skill 2. Maybe a bit excessive at times in its use of Drake entities but it's not the worst thing to be guilty of.

It's worth noting all these levels can be played from shotgun start. Cool feature, as the maps are time-consuming enough, so it's good to be able to just skip to my favorites and replay them as I wish.

That's quite a compliment fairweather, to have the absolute worst map set in the entirety of Quake's history, worse than anything ever released from 1996 all the way until 2020, and without even explaining as to why its the most unrelentingly terrible, god awful most egregiously offensive Quake maps that someone would ever dare consider sharing online. That's gotta be a record.

This is wonderful stuff. Gorgeous maps, exciting combat, and Drake's cast of enemies. Special praise for the final map, With Deference in Eminence, but I enjoyed all of them greatly. There is no sense of wasted space, the backtracking isn't obnoxious, especially because the author will add extra enemy encounters along the way. Just to go on a little more about Eminence, that was some of the most fun I've had in a shooter. Lots of dying to be sure, but damn that was great. The enemy placement was really on its A-game.

4.5 because of Galiduse Point. I like the idea a lot: Scaling the outskirts and mountains of this sleepy winter village, coming across the village and exploring/killing its inhabitants. But that none of the buildings were able to be entered really stung for how long we spend fighting in the streets of this village. There's a large cathedral, and I was so sure a fight was going to happen there, but it never did. Noclipping inside of it finds it totally empty. And then there's this out of nowhere military bunker with a tank that fires but can't aim at you, the grappling hook lets you get in places with dead ends; there are two exits, and you can reach the first one without ever facing the map's boss, and as far as I can tell there's no bonus for this. It's very indicative of being rushed. I'd much rather the author ixnayed the military bunker and focused more on the village. There are these caves which tease a network of something more, and I thought I was going to get a lot more use out of the grappling hook, but it leads to nothing interesting. None of this is damning, as I enjoy the map. The bit in the bunker where some enemies leap onto a ledge was really good, getting ambushed by axemen while exploring bushes for items was fun, and just fighting in this village at night was enjoyable as hell. But definitely loss of half a point for the problems it has.

You would find me crazy for giving a score greater than 1-2 stars, but bear with me a bit.

It's true, this episode shares nothing in common with what people intimately associates with Quake and even maps like The Masque Of Red Death are midgets next to this one, questioning further if the giant aspect is actually a good thing. In those departments, it definitively lost lot of points and because the maps are so wide and large, functional elements like crushing rooms, torturous chambers etc are unheard of, further stripping away points. So why I give it a 3?

The best example I can come up with is Shib4, which is the Asian Temple. The details are absolutely gorgeous and it is little surprising my GTX 1660 Super somewhat loses some FPS when playing it. It does help the fact unlike other maps from this somewhat cursed episode, most combats takes place in tight indoor areas that arent much wider than what most levels would get accustomed to, making Shib4 much more playable. If you are insane enough to review every 1.5K+ maps Quaddicted has in store, you would definitively recognize some maps are absolute poorly aged monstrosities next to this episode. Yeah I am looking at you, 1916_v2.zip ...

So if it visually beautiful, why is it flat out trashed? I think if this episode was done for another franchise other than Quake (ideally something with a complete focus on IRL maps), it would have reached a much better score. But the creator of this episode has targeted the wrong audience and even me has a hard time to give a 4 stars. Speaking of " better belongs to another franchise ", you know when people says Doom 3 would have been better if it was a F.E.A.R gaming or something? They havent seen this one.

Deviation from the original is not a bad thing, as long as it all works well. Some people play Quake mods for a pure Quake experience, but in the end the authors will express themselves however the fuck they want, and will be right to do so.

That said, pretty much everything in Quake was made with close quarters in mind. That's why the engine struggles so bad, along with the player.

It is difficult to assess this episode unambiguously. One thing can be said - a lot doesn't always mean good. Such vast spaces should be teeming with secrets, branches and nooks. Otherwise, you get the impression that you are walking through a plywood film studio, where extras sometimes appear. There are no main characters. We all know perfectly well that an author can do quality things: the wonderful Conflagrant Rodent and the absolutely incredible Cataractnacon / Zeangala - a kind of techno abstractionism. My favorite here is shib2. I love puzzle style. And the huge centrifuge at the end is something special. I suppose the episode should be perceived as a demonstration of the capabilities of the Quake engine (to bring GeForces to its knees ;)

What are the differences between the Redux and regular versions of these maps? Is it worth it to play these if I have played the regular ones?

The Redux version updates maps 1 through 5 with not just Drake mod additions like monsters, weapons and items but also has bug fixes, visual improvements and in some cases design overhauls.

Cool, thanks. Too bad these don't work on my old computer, but I'll make sure to get back to them when I get (or if I ever get) a new one.

could you make a version compatible with the Arcane Dimensions mod?

Thank you in advance. :)

Fairweather dropped the most scathing review anything's got on Quaddicted.

for people whose systems are choking on this:

The readme on the IronWail source port (Quakespasm fork) mentions this map pack as something a quake engine would coke on. So if you're dropping frames, try IronWail. https://github.com/andrei-drexler/ironwail