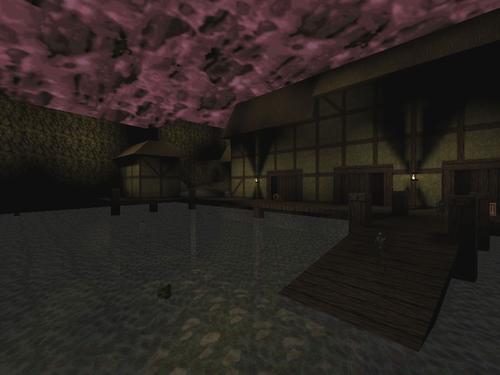 This is the GLquake version of shadow supporting transparent water.

Good, well balanced map that holds up even today.

I played this recently for Scampie's "Let's Play" thread on Func_Msgboard, so this post is mostly an edit-down of my comments from that thread. I know I played this before, but probably back near when it was first released. So it's been a long time!

Nice layout, just enough nonlinearity for a bit of exploring but never getting lost. I was vaguely expecting a streets-with-freestanding-houses environment (I might have been remembering some other map); it actually turned out to be usually more abstract and/or enclosed, but that's fine too. Cozy-spooky in a good old-school Quake way.

The selected music track works very well. And a Lovecraftian atmosphere is always good when using the Quake assets; I particularly enjoyed Rescoe's choice for the setting of the final few areas.

So: it's a fundamentally good map! I noticed several clever bits in the encounter setups as well as the placing of weapons and powerups. The pacing was right, both the combat rhythm as well as the way that the map draws you through a variety of areas.

Rating a classic map is kind of an iffy task. I'm sure I would have given this "5 hearts" back in the day. Compared to all the Quake maps we've seen since then, this one doesn't have the level of visual detail and polish that the best maps do. But on the other hand that helps give it a nostalgia boost, if you're an old fogey like me.

I enjoyed this, there is a real episode 4 vibe with this map that is missing from a lot of maps.

That pyramid slipgating to the underground level is very Soul Of Evil - Indian Summer like.

This is supposed to be some sort of "sequel" to Village of Dread by the same author and though it looks as dated as Village, it is superior in every other way. There's no point in retreading what the others have said so I'll just add that the final area is strikingly similar to my very first attempt at mapping, all the way back when. The difference is Steve Rescoe actually finished his map...

Replayed this. I think it's dated very poorly, with many of the combats feeling cramped and awkward. And so much reliance on bad guys hiding in the shadows. I suppose we shouldn't judge 1997 maps too harshly, but the gameplay problems with this one are nothing that couldn't have been addressed back then.

Very much enjoyed the pulp-fiction feel and overall vision in this one. Dated for sure, with some visual glitches and, as mentioned, overuse of enemies in shadow. But all in all the use of water, traps and a few great vistas/spaces gave this a great speculative-fiction narrative where the designer repeatedly surprised me.

Really enjoyed this. It must have been quite novel when it was released, and even though it looks dated now, it retains a Lovecraftian atmosphere and sense of place.

What a waste of time! Dark rooms, greenish scrags, blueish shamblers. Why is it that lots of mappers think that they should modify monsters? I'd rate this 2 out of 5. Boring gameplay. Dark locations, awkwardly looking monsters.

You have to take into consideration that these older maps were made using editors that did not have any 3D/openGL acceleration. The authors had to create all this 3D geometry in 2D map editors. It is extremely difficult, and that is why any map from the 90s era that meets the ID standard is an excellent map.

This map tells a great story, and has a unique ending with the player discovering a sunken pyramid. It truly captures the Lovecraftian feel of Quake. There are some rough edges indeed, some traps are unfair, and the lighting is too dark in areas. However, this is a truly great 90s era map. I recommend to all Quake enthusiasts.

I really enjoyed this map as well and it is a vastly improved map compared to "village of dread" . I liked the journey that the mapper provides the player throughout the map leading to final of discovering the sunken pyramid that lead to another lovecraftian world where the final of the map takes place. I enjoyed the new reskinned quake monsters as it made the quake experience feel fresh and new. However i would agree with one of the above posters that the map is excessively dark which can make it a little bit difficult progressing through the map. Overall I would give this map a four out of five rating and say that is map is a must play if you enjoy classic maps and mods from the 1990's.

Revisiting this map again, what a fuckin master piece.

I dont know why, but when im playing this map i think im in a lovecraftian coast town haha.