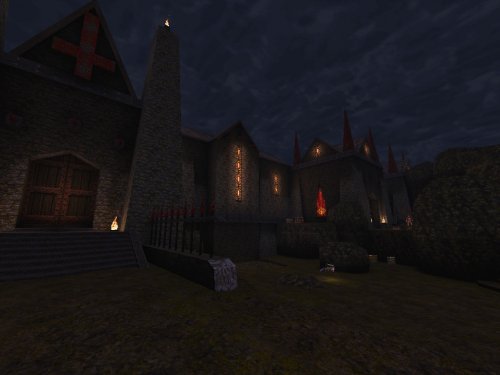 Updated version 1.1 of Underdark Overbright:
An episode with seven medium-sized levels plus remixed/remake versions of the original start and end maps. Mostly Wizard/Medieval/Runic style textures; the map sources are included. The episode accompanies the release of the Copper mod and serves as a showcase for the changes.

Note: These maps require Copper and a source port with increased limits (as well as support for alpha textures).

That was a fantastic episode, had a lot of fun. Great secrets and drooled at the beauty of some areas. Inspiring stuff!

Oh well. Now my fav secret is 'keep it safe keep it secret'. Really cool. I liked that. Not to mention that it was very pleasant to find o whole secret level! THANKS for the episode. It was great

Copper serves as - more or less - a refinement of vanilla game, and the new episode is a nostalgic trip through levels that feels not unlike classic episodes. Includes some wonderful combat situations, not to mention a new Chthon fight in the final map... and fully remade "end" map that caps Underdark Overbright AND original levels. The fight with Shub-Niggurath is fully redone and... won't spoil it, but it feels fresh and clever.

Incredible episode and a perfect introduction for the exemplary Copper modification. Easy 5/5 rating.

Awesome, played through on Remastered with no issues (copper mod worked great). Love the way secrets are telegraphed in this with cobwebs. 5/5 :)

This is an excellent episode that really lift the vanilla quake experience with careful refines and an modern level design. You have to play this!

Is it possible to access the "end" map without using console commands?

A great episode that showcases Copper's features nicely. Lots of creative and novel ideas in these maps; an easy 5/5 for sure!

P.S. This was the first map pack I've played in a long time, so I had forgotten to record demos of the episode, like I had usually done in the past; sorry!

udob4 is a take on the Q3DM6 map and is fantastic. It's a classic layout that makes for a great map.

I just played through the campaign on co-op with my wife, who's never played Quake before, and it was great! The addition of more players was taken well into account in the level design, changing up the puzzles to accommodate the players and there may have been more monsters and resources, too.

Since my wife was new to Quake, we played on easy, but the game still felt challenging enough to keep us on our toes. We died only a few times: First on the Drowning, because the puzzle had changed, which resulted in us both drowning. My wife also died once in regular combat in the silver key room. (Really liking the respawn mechanic of Copper, btw.) Then a few lava deaths happened while fighting Chthon.

I think my favourite thing about the co-op changes was the aforementioned changing of the puzzles, especially in the Drowning: Considering how the map was already so inventive in iterating the puzzle in the single player mode, I found it super cool how one more way of completing the puzzle was added in co-op play!

The other maps also featured puzzle changes, but they were usually of the type of having both players press buttons simultaneously before a door could be opened, so not as elaborate as in the Drowning, but still cool, regardless. In fact, I think my wife liked the puzzle elements of the campaign the most. (She plays MMORPGs, mostly, not classic shooters.)

The Copper mod's other co-op changes also helped elevate co-op into a fully realized game mode. In addition to the aformentioned respawn mechanic, I really loved the quality of life feature of having platforms wait for other players to hop on before moving. I also ended up liking how the coop weapon pickup mechanic was changed.

The only thing I wasn't really a fan of were the "resource negotiations" whenever we'd come across a health or ammo pickup. I'd have to ask how much X resource my wife had before deciding who should pick it up. Here are some ideas I think could help with the hassle:

Regardless, it was a great co-op experience, that I can recommend to others, too. My wife liked it enough to the extent, that she'd be willing to play other co-op campaigns later. I'd definitely like to try Forever Lost.